The Italian POWs allocated to the prisoner of war centres in Queensland transitioned from their place of capture via Middle East and India to Australia.  Some of the transports included Queen Mary (Libya) Sydney 27.5.41, Queen Elizabeth (Middle East) Sydney 5.10.41, MV Brazil (Bombay) Sydney 4.10.43, Mariposa (Bombay) Sydney 1.11.43, Mooltan (Bombay) Melbourne 29.12.43 and Ruys (Bombay) Melbourne 28.2.44. (National Archives of Australia NAA: MP1103/2, 1939 – 1945)   The General William Mitchell ex India arrived in Melbourne 13 February 1945 transporting alleged Fascist Italian Prisoners of War who had spent up to four years imprisonment before arriving in Australia. Once disembarked at port of entry, these Italians were then entrained to Hay, Cowra and Murchison. The other major POW Camp where some Italians were posted was Yanco. 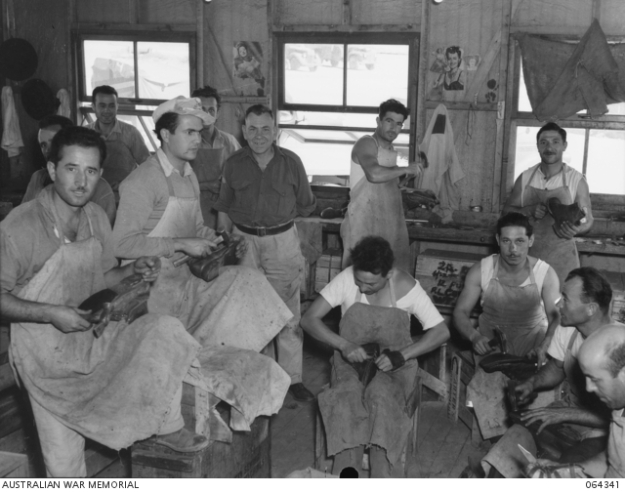 Cowra NSW 1944-02-04 Sergeant J.H. Lovell of 22nd Garrison Battalion who is in charge of these Italian Bootmakers at the 12th Australian Prisoner of War Camp

These Italians were captured or had surrendered in various theatres of war. The men who were allocated to the nine PWCC in Queensland were captured in Egypt, Libya, Abyssinia, Eritrea and Albania. The men who went to Home Hill were, in the majority captured in Libya, specifically Tobruk and Bardia.  Some were captured Egypt: Sidi el Barrani and Buq Buq; Greece and Ethiopia: Gondar. Italians ex India were not to be employed north of latitude 23° south as malarial infection was a concern and therefore were not available for transfer to Q6 Home Hill Hostel.  Generally, the POWs who came to Australia in 1941 had their place of capture recorded as Libya without reference to a specific town or place. Those arriving in 1943 through to 1945 either through prompting or better interpretation and processing services have specific towns recorded.

Administratively, there were three categories of facilities or ‘camps’ to which POWs were allocated in Queensland.  The word ‘camp’ is often used generically but specifically the terms were camps, control hostels and control centres: without guard.  In Queensland the Prisoner of War and Internment Camp at Gaythorne was the administrative authority for all Italian POWs in the state.  Gaythorne PW & I Camp, located at Gaythorne, Brisbane had a capacity of 1800.  Nationalities held were: PW – Italian, Japanese, Korean, Formosan, sundry and Internees – Italian, sundry.  It operated from 1940-1946.  It had 3 compounds each of 300, 1 compound of 400 and 1 compound of 500.The Queensland Italian POWs were transferred from southern camps to Gaythorne.  From Gaythorne, POWs were sent to a Prisoner of War Control Centre: Without Guard (PWCC) or Prisoner of War Control Hostel (PWC Hostel). Some POWs however remained at Gaythorne, seemingly deemed ‘unfit’ for work.

The POWs sent to work in Queensland transited through Gaythorne in Brisbane and Gaythorne remained the parent camp of the Italian POWs. The Gaythorne Camp was under the command of Camp Commandant JM Hinschen, 2 Aust. P.W. Guard Company and later Camp Commandant Captain J Todd. It was situated at Bliss and Newman Streets, Gaythorne just north of the Enoggera Barracks’ precinct. Periods of detention were served at the parent camp and as well, Gaythorne was a staging or holding camp for prisoners of war in transit. A POW who had spent time at a hospital would at times return to Gaythorne until a future transfer to a PWCC could be arranged.  Italian Prisoners at Gaythorne were employed in a small vegetable garden adjacent to the camp and in clearing a site for additional accommodation.

The 10 Italian PW Centres in Queensland were established to provide labour for primary industry production in the areas of: dairy, general agriculture, vegetables, pineapples, fruit and vegetables, pastoral. The Italian POW workforce was not take jobs away from Australian workers, nor should Australian workers be displaced in lieu of Italian POWs, rather they were to replenish a workforce depleted by enlistments and internments. As well, they were not to be utilized as a workforce for the grazing industry.

All the Queensland PW Centres with the exception of Q6 Home Hill, operated as a PWCC (Prisoner of War Control Centre: Without Guard). They were centres established in townships to administer, allocate and oversee the Italian Prisoners of War working in the district. Army personnel consisted of Captain, interpreter, drivers, administrative clerks and guards.   The POWs were billeted with farmers: two or three POWs per farmer.  POWs selected for PWCC generally were to have a farming or agricultural background or skills that would be of service in farming.

A PWC Hostel was an established hostel which housed POWs working on a specific project. For the Q6 Home Hill Hostel, the mix of occupations were formulated according to the requirements of the scheme and to select men with occupations that would be of benefit to a ‘closed’ and self-contained community. Specifically, requests were made for protected personnel, workers, cooks, fatigues, tractor drivers, mechanics, supervisors and a cook, a tailor, a barber, a clerk and a general duties made up the five allocated General Duties ORs.  The majority were farmers, farm workers or labourers with the other prisoners coming from a variety of backgrounds eg trades and services. 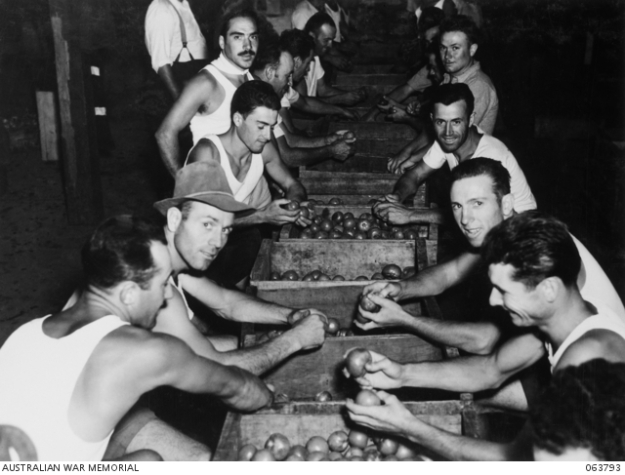 Yanco, NSW 1944-01-29. Italian prisoners of war (POWs) from No 15 POW Camp grading and packing tomatoes at the packing shed before sending them to the Leeton Co-operative Cannery for processing