Jynette Brumpton of Banana Queensland was going through some paperwork of her parents and found old black and white negatives.  To her delight and amazement, two photos were of the Italian prisoners of war that had worked on her parents’ dairy farm at Ponde near Murray Bridge in South Australia.

Jynette’s mother Grace remembered that one fellow’s name was Paolo Bernardi but that Grace and her husband Ernest had difficulty pronouncing his name so asked if they could call him Bernard, which they did.  Also remembered is Giuseppe.  The Sneaths were going to sponsor Giuseppe to return to Australia but economic circumstances prevented this.  The third man was Giuseppe’s brother-in-law. 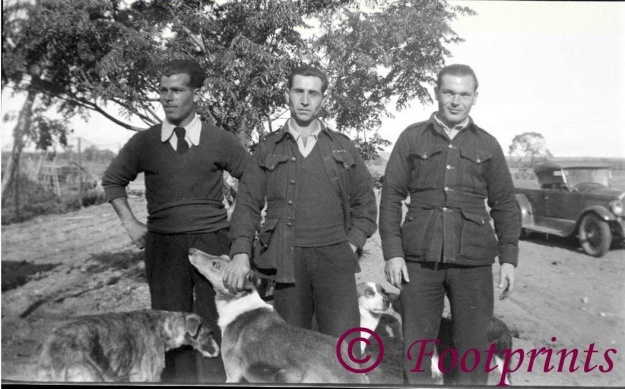 And so began Jynette’s journey to discover the stories of her parents’ POWs.  A NAA request gave the name of the third man: Domenico La Torre. “My mum at 96 is a bit sketchy about things that long ago but still remembers some things clearly.  A clear memory is that Giuseppe always wore a tie. Mum says that when they received a letter from Giuseppe asking for sponsorship dad went to see the relevant authorities in Adelaide to see what was involved.  After much soul searching and shuffling the money around dad felt that he just wasn’t in a secure enough position financially to sponsor someone,” explains Jynette.

All three were captured at Bardia on 4th January 1941.  From Nocelleto (Napoli), brothers-in-law Giuseppe Pagano and Domenico La Torre stuck together as when they were processed at Geneifa in Egypt the Middle East Numbers issued were 70004 and 70006.  With 40,000 Italians surrendered/captured at Bardia, staying together was no easy task.  Paolo Bernardi came from Terracina Littoria.

An additional document which sheds light on farming life in 1944 is the farm ledger kept by Ernest Archibald Sneath.  This ledger offers a window in past farming practices.  It tells of the small crops grown through the seeds purchased, the income from milk production, the cost of screws, nails, steel wool, oil, petrol and diesel.  Before Jynette found the negatives and began her search about her family’s Italian POWs, the meaning of the notation PWCC would have eluded her.  Now Jynette knows that the 9 was paid to the prisoner of war control centre (PWCC) at Murray Bridge: S4 PWCC Murray Bridge.  The labour cost was £1/week per Italian indicating that the canteen truck would have visited the farm on a three-week cycle.

Jynette noticed that only £7 was paid in one cycle, but when cross-referenced with the Service and Casualty Forms, Domenico La Torre had left the farm to go to hospital between 17-11-44 and 30-11-44.  Jynette comments, “This history is like one big giant puzzle.  The photos are part of the puzzle, as are dad’s ledgers and the Italian Service Forms.”

Another piece of the puzzle emerges about a fruit and vegetable shop in Mannum. Jynette explains, “My parents ran a fruit and veg shop during part of the war years. I knew that and can remember going into it when I was small. It was in Mannum the local shopping centre. My maternal grandmother ran it for dad. But what I didn’t know until recently when mum and I were having one of our POW chats is that she said it was Giuseppe who made the suggestion to dad in the first place.  My father was a great veg gardener and Giuseppe noticing that, asked dad why he didn’t sell to the people in Mannum. So after some discussion that’s what they decided to do. The POWs would grow the vegetables, dad would go weekly to Murray Bridge to procure fruit and Nan would run the shop. My Nan kept the books and the shop paid £3/week for the POW wages [reimbursement to dad].  I should imagine that once the Italians left dad wouldn’t have been able to keep growing veg as well as maintain the irrigation and dairy etc. The list of veg is interesting as some of those varieties like Greenfeast peas are still being grown so it’s nice to think that some things stay the same,” explains Jynette.

Another important find for Jynette are other farm records kept by her family, revealing a little more of Australia’s agricultural history.  The pages reveal what was planted and when the crops should be ready to harvest as well as the different varieties of vegetables grown seven decades ago.  Today, most people would not know the difference between a triamble and gramma pumpkin or Chatenay or Manchester Table carrots.

This is more than just the story of three prisoners of war on a South Australian farm.  These three Italians were part of a group of 13,500 Italian prisoners of war working on Australian farms from 1943-1946. This is also the story of farm diversity during war time; the hospitality of Australian farmers; the Italians who are remembered seven decades later and whose footsteps are found in black and white photos, on the pages of farm ledgers and in the memories of Australians. Jynette Brumpton’s black and white negatives have added ‘colour’ to this history.

PS Grace Sneath also remembered that there was another Italian POW who didn’t stay long.  After further research, a document reveals Silvio Pellacani was transferred from EA Sneath at Ponde to EB Brand at Ponde on 3rd May 1944.  He was sent to S4 PWCC Murray Bridge on 18th March 1944.  He was likely to have been replaced with Paolo Bernardi who arrived at S4 PWCC 2nd May 1944.