It is over 70 years now since Italian Prisoners of War who worked and lived in Australia for up to six years, left Australia for their homes in Italy. Their legacy is lasting in many ways and a poignant tribute is “Rabbits & Spaghetti” as is highlighted by the label below.

“Rabbit & Spaghetti” is a wine label from the vineyards of South Australia. This wine pays tribute to the Italian Prisoners of War who worked in the grape growing industry in the state.

The label reads: “As WWII swept across Northern Africa, the idyllic landscape of Australia’s wine regions must have seemed a strange place of incarceration for a prisoner of war. And yet this is where scores of captured Italian soldiers found themselves labouring on farms and vineyards in place of a generation of young men far away at war.  Without this help many a grape grower could not have endured these times.  In return for their labour, the farmers shared their homes and tables with their ‘prisoners’. Rabbit and spaghetti was a staple and from those shared meals, traditions and friendships were born that have outlasted the war.” (Naked Wines Australia Limited, 2014)

Rabbit and spaghetti was a well remembered meal made by the Italian prisoners of war on farms.  Rabbit was also referred to as ‘underground mutton’.

Maria Pepe from Oppido Lucano (Basilicata) hoped for the impossible and that one day, she might discover information about her father’s time on a farm in Australia.

Michele Pepe’s journey as an Italian solider and prisoner of war is like thousands of others: captured at Bardia Libya, sent to British POW Camps in India, arrived in Australia, sent to work on a farm, repatriated and arrived in Italy in 1947. But every Italian prisoner of war took home with them unique memories and sometimes photos.

Maria hoped that two photos her father kept, might help her locate the farming family. It is remarkable that not only has the Bruce family been found, but that both families have kept safe the same two photos. Mr KW Bruce from Riverton South Australia employed Michele to assist him on his mixed farm .  “The broadacre crops grown on the farm were wheat, barley and peas.   Mick helped to milk 25 cows every morning and evening.  The farm also had 100 pigs, 500 sheep and about 100 chickens.” Heather Jackson (nee Bruce) recalls. 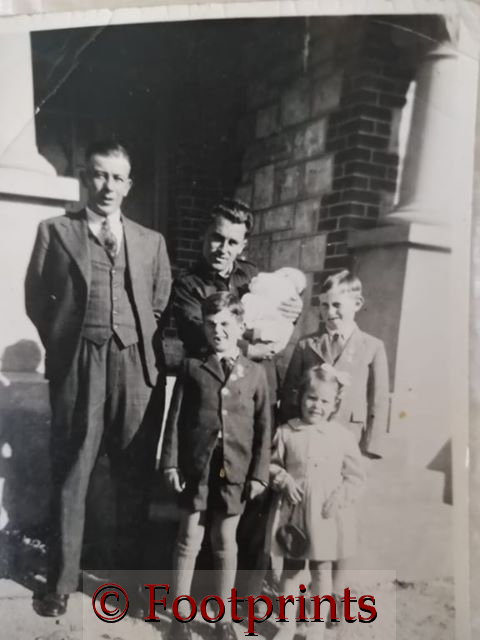 (photos courtesy of Maria Pepe and the Bruce family*)

The two photos captured Michele with his farming family.  In one photo he is happy, nursing a baby and standing with the farmer and his children. The other photo has Michele with Mr and Mrs Bruce and their four children. Maria Pepe writes, “My father always spoke about those three children so close to him.  He often spoke about the suffering of leaving them to return to Italy.  He told me, … [the young girl] cried when he left for Italy.”

Heather Jackson (nee Bruce) is the little girl in the photo and has provided invaluable information to Maria Pepe.  “Michele (or Mick as the family called him) lived in a 4 room cottage in which he had the use of 2 rooms and a bathroom.  This cottage was about 30 metres from the family home.  Mick joined the family to eat all his meals,” Heather remembers. Maria remembers her father talking about, ‘the great humanity of Mr and Mrs Bruce who took Michele as one of the family.’

The Bruce siblings remember and reflect upon Sundays and Mick’s journey into town to attend church as Heather recounts: “Mick borrowed a horse and sulky to travel 5 kilometres into Riverton alone to attend the Roman Catholic Church service at 8 am on Sunday mornings.    He would park the sulky and horse in the Methodist Church yard and walk to his Church.  The Bruce family were Methodists, so he felt it only correct to park the horse and sulky in the Methodist Church yard. The Bruce family’s Methodist church service was much later in the morning, well after Mick returned from his church.”

A gesture of respect from a prisoner of war to a farmer.

The documenting of this history can be sometimes, one sided: an Australian farming family memories OR an Italian family memories.  It is special when this history can connect both families.  Maria has shared with the Bruce siblings, a little about Michele’s life after his return to Italy, and Heather has shared with Maria and her brothers details about farming life in the 1940s and special memories of Mick.

And Michele’s reflections of his time in Australia and being a prisoner of war will resonate with many Italian families: “Australia was  beautiful and rich, but here in Italy, I feel like a king in my home.” (Maria Pepe)

Cyril Blacket of Pinery South Australia met an Italian prisoner of war at his local church.  With good intentions, Cyril tried to communicate with the Italian farm worker, via the Pidgin English for Italian Prisoners of War booklet, with little success.  But Cyril felt that if he had a copy of the booklet, he might be able to make some progress.

On 3 July 1944, Cyril sent a letter to Officer-in-Charge, Defence Dept Headquarters Keswick: “I have been trying to help him but finding it very difficult to make him understand.  Such a book as you issue the prisoners would be a great help to me in conversing with him.  Could you oblige me by sending a copy along?” (NAA: D2380)

Unfortunately, Cyril Blacket’s fraternising was reported to the Deputy Director of Security and the Prisoner of War Control Officer at S3 Clare with advice and warning :

“There is a PW working for A.J. Stanley of Pinery to whom Mr Blacket may be referring.

PW are not allowed to fraternise with members of the public, PW Camp Order No. 13 Sec 68 (c).

It would be appreciated if Mr Blacket be warned accordingly.” (NAA: D2380)