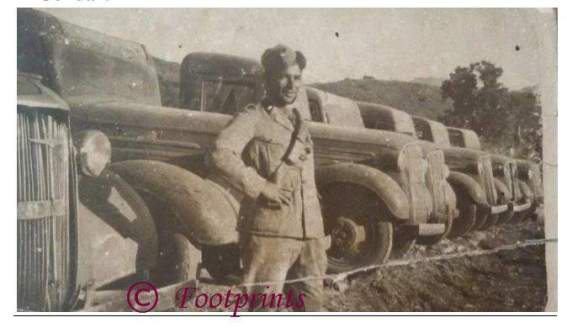 Luigi explains a little about his father’s military service: “In 1935 he was a soldier until his discharge in 1937. In 1939, he was recalled to arms, embarked and left for East Africa and assigned to the Autonomous Detachment Autocentro in Gondar. This picture [below] is dated October 23, 1940, my father is the first on the left.”

Antioco’s Australian Service and Casualty Form, fills in some of the missing details.  He was captured at Uolchefit 22nd September 1941 which is to the north east of Gondar. Before his arrival in Australia, Antioco was a prisoner of war in India from 1941 – 1944.

Luigi now knows his father better, with thanks to the army officials who kept these records.

Antioco was allocated on paper to S13 Mt Gambier-Penola-Mt Burr.  His assignment was to the Mt Burr forestry sub-camp and hostel.  He had been part of the first group to set up this hostel and Vincent Healy, a forestry worker at Mt Burr said, “… and anyhow the army had a  whole heap of Italian Prisoners of War from the Middle East who had been in India and they’d, when the Japs looked like taking over India, they stuck them all on a boat and sent them out to Australian and landed… landed them, so we got landed with a camp full of those.  But er … they  didn’t cut any wood at all, oh they’d cut a few hundredweight that’s all they’d cut a few hundredweight a day and then knock off, it was too hot.  It was run by the army, I had no authority over that, that was an army camp.  It was our camp and we were to get the wood but er… we got very little wood out of them.  See the first week they were there, they put them in this camp and I went out to see the bloke in charge of the camp and I said, “When are we going to get some wood?” he said, “When we get the camp ready,” He had these blokes all painting white stones to make nice pathways round the camp and all this sort of business.” from Vincent M. (Vin) Healy J.D. Somerville Oral History Collection State Library of South Australia

But this memory does not apply to Antioco.  Basil Buttery, Captain of S13 Hostel wrote: “An excellent worker and a steadying influence and leader of other P.W…  This P.W. is needed again in this hostel on completion of [dental] treatment.  His return is requested… Excellent type. Desirous of remaining in Australia.”

Luigi says, “I never heard my father say he wanted to go back to Australia.  He was too many years away from his family and had great nostalgia for his land and his friends.” But Antioco’s photos of local residents indicates that the hospitality of locals and the respect he gained from Aussie workers left an impression on him. While Luigi understands more about his father’s time in Australia, he would like to know something more about the people in these photos. 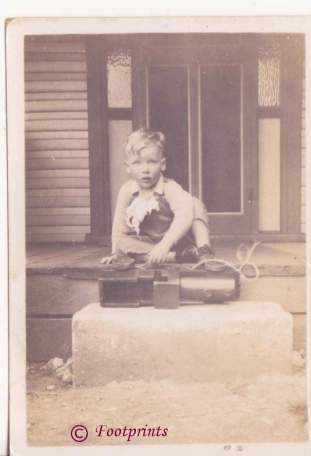 To Jimmy Man from John

Another record in the National Archives highlights that Antioco had an exceptionally good character, was an excellent worker who was industrious and ‘by far the best type in S13 hostel’.  Possibly AE Warren from Millicent worked with Antioco in forestry or Antioco worked on the Warren’s farm.  With every question answered, there is another question left unanswered. 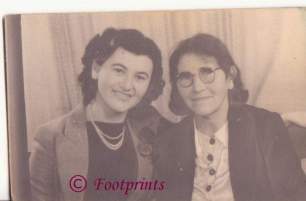 To Jimmie from AE Warren Millicent

“My father returned to Italy and he has always been a farmer.  He worked the vineyard and made wine and also produced tomatoes, aubergines, watermelons and melons.  On 25th April 1950 he married my mother GiacominaTrincas,” reflects Luigi.  Antioco died of a heart attack in 1976.  He was 61 years of age.

Click on the link to read more: Journey of Antioco Pinna

*All prisoners of war have two files available for viewing online at the National Archives of Australia.  The documents contain valuable information about movement, places and basic personal details.

Some states of Australia eg Western Australia and South Australia have additional archived documents.  The stumbling block for Italians doing research is the process of obtaining copies.  It is easy if you read English, but extremely difficult and confusing if Italian is your only language.  Following the guides linked in Finding Nonno: Finding Nonno and How to Order NAA Luigi has unlocked a file containing information about his father.

This research opens many doors into the past.  For my generation, a record player was powered by electricity and was fitted into a well-made cabinet befitting a place in the family lounge room. I knew of gramophones cranked by a handle for operation.  But I had never thought of a gramophone as being portable.

Enter Luigi Pinna from Cagliari Sardinia.  Luigi sent me a photo of his father Antioco Pinna* and taking pride of place is a portable gramophone.  My eyes were focussed on the men, Italian prisoners of war in South Australia, so I had not noticed the crank handle.  And so much of what I have been told about Italian prisoners of war and music now makes sense. Portable gramophones gave easy access to music.

A portable gramophone allowed soldiers to take their music with them, regardless of how many times they were moved or transferred.  I read about t Jim, an Aussie soldier, who had taken his with him from the deserts of Tobruk Libya to the rainforest of Milne Bay New Guinea. And similarly, the Italian soldiers would have taken their portable gramophone from Ethiopia to India to Australia.

Be taken back to those times and listen to Jealousy  and Conchita Marquita Lolita… songs which we know the Italian POWs listened to.

One 1941 newspaper article mentioned that the Red Cross was looking for donations to send to our soldiers. “If music hath charms to soothe a troubled mind,” then surely this is just what these men want, and a good portable gramophone is always a welcome.  To be able to listen to the latest dance tune, or even a symphony orchestra when one is miles from anywhere in the desert must be quite a thrill…”

Some of the newspaper headlines of the time read:

A.I.F. to Learn French (via gramophone)

* Antioco Pinna was from Palma Suergio (Cagliari Sardinia).  He was sent to South Australia and allocated to S13 PWC Hostel Mt Gambier-Penola-Mt Burr.  The search for information about his stay in South Australia is  ongoing. His son Luigi is hoping to find the South Australians in photos brought back to Italy by his father.