The story of Tito Neri began with two photos sent to me by Luigi Pinna from Cagliari Sardinia. They were a puzzle.  Why did Luigi’s father, Antioco Pinna have in his possession two photos of a sculpture created in South Australia by Tito Neri?    What was the story behind these photos?  Where was this sculpture of Adam and Eve created?  Did this sculpture or any record of it still exist?#

Who was Tito Neri?

Tito Neri was a talented and well-respected sculptor from Villa Casone di Cesena (Forli). But for a time, he was an Italian prisoner of war living and working on South Australian farms.

While Neri’s Australian Service and Casualty Form records his occupation as bricklayer his biography relates that from a young age, he had a natural talent for art.  He went on to train at the Academy of Fine Arts in Florence. For further details of his work: Neri Tito

In 1939, he was sent to Libya as a soldier in the 11th Artillery Division, 202 Regiment and was captured at Alam El Tumar 9th December 1940. Sent to prisoner of war camps in India, Neri found time to sculpture with some of his memorable works being: Il Barbaelettrica, Il Duce, Il Re e L’Aquila Imperial, Don Bosco in marble, Il Re di’Ingheiterra Girogio IV, I Re Magi.*  Word spread amongst the English of his talents.

From his Australian POW record, he arrived in Melbourne, onboard the Mariposa and sent to Murchison for processing before a transfer to Sandy Creek POW Camp in South Australia.  Farm placement on farms in the S2 Willunga POW Centre and S1 Mt Barker POW Centre, left him with little time to pursue his art. A comment made by one of his employers was, “This man is a clever sculptor and all spare time is given to this. Works well otherwise.” 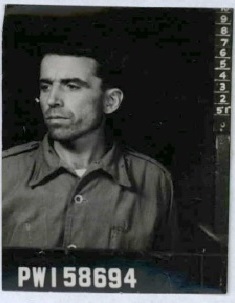 He worked on a farm owned by Hartley Roy Moulds of Ashbys Road Inman Valley where he fell in love with the farmer’s daughter, Hazel who left an impression on the ‘sculptor’s soul.‘ An S2 PWCC Willunga report records, “This man is a good type, above average intellect, but romantic… Not necessarily bad but would be better employed away from women.”

Neri was transferred to the Usher farm near Meadows and also worked for six weeks at Mr MS (Maurice Samuel)  Pearce’s farm Doringa at Paris Creek.  He also worked Mr FS Evans farm at Aldgate Stirling which was his most serene and welcoming placement.

“For his art, the years lived in Australia are much less prolific than those in India and that is due to the hard and unceasing work in the ‘farms’. In fact, Neri only sculpts a few subjects: a kangaroo, a large snake in cement, a bust of a Boss and above all, an Adam and Eve which nevertheless appears even in an Australian magazine,” as is explained in his biography by Dott. Andrea Antonioli, Commune di Cesena.

Puzzling however, is how did Antioco Pinna have in his possession two photos of Adam and Eve and the serpent, which could possibly be the sculpture mentioned in his biography. 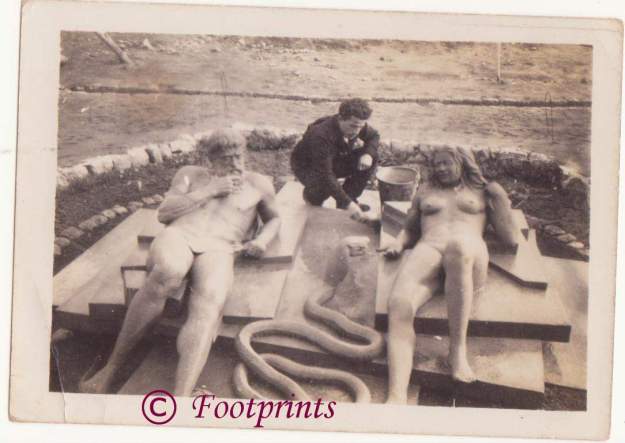 A Puzzle: Is this Tito Neri with his sculpture Adam and Eve?

Antioco Pinna from Cagliari Sardinia and Tito Nero from Villa Casone Forli were in different theatres of war: Pinna Wolkefit Ethiopia and Neri Alam Et Tumar Libya.  What they do have in common is time in the POW Camps in India, arrival in Australia on the Mariposa 5th February 1944, time at Loveday POW Camp in 1946 and their repatriation on Strathmore 7th November 1946.  While Pinna was assigned to work in Prisoner of War Control Hostels on government projects: forestry, Neri worked on individual farms.

Still a puzzle: where in South Australia did Neri create his Adam and Eve?  Does this sculpture still exist?  What Australian magazine was his work featured in?

#The sculpture was created at Loveday Prisoner of War Camp during 1946.  It was said that Tito Neri destroyed his work before leaving the camp for repatriation to Italy.