Darren Arnott  grew up in Rowville in the 1970’s and 1980’s and had heard stories from some of the older residents about the Rowville Hostel which had always intrigued him. When he purchased a house in the 1990’s near a bush reserve with remanants of the Rowville camp he researched and documented the site and the local council used his research to place signage about the history of the site.

Darren also came across the details of ‘the shooting’ and the infamous Camp Commandant.  And with most history research, one document led to another then another…

Below is an edited extract from the forthcoming book No Regard for the Truth by Darren Arnott.

My most sincere appreciation to Darren for sharing his work.  I look forward to purchasing a copy of his book in 2019. For further details, Darren’s contact information can be found below.

NO REGARD FOR THE TRUTH

At 6:48PM on Saturday the 30th of March 1946 the Victoria Police Communications Centre, D24 received a phone call from Rowville Prisoner of War Hostel Camp Commandant, Captain Waterston requesting assistance at the camp. The call was broadcast to police cars in the area.

“Camp reports trouble among P.O.W.S. Requests that patrol be sent to assist. Contact Sergeant and Police on duty in street and instruct them to attend.”

Radio broadcast from Lt Maloney. “I will go to Rowville, please detail Sergeant Carroll in car 116 to attend and take any action necessary pending my arrival.”

Around 6:30 that evening as most prisoners were finishing their evening meal, Rodolfo Bartoli suffered a serious gunshot wound. Nearby prisoners who heard the gunshot and Rodolfo’s cries in Italian of “He has killed me”, ran to his aid. Rodolfo was carried to the camp hospital on a stretcher where he was treated by the Italian Camp Doctor, Joseph Galli. Rodolfo was losing a great deal of blood and Doctor Galli, realising that Bartoli’s condition was quickly deteriorating called for a camp car to rush Rodolfo to the Heidelberg military hospital.

He asked Captain Waterston, “What is the trouble sir?”

“There has been some trouble here tonight. I threw a picket around the camp. I was walking through the camp myself when I saw a man moving through the wire. I called on him to stop and he did not stop. I then fired a shot. Later I found that a man had been injured in the groin, or shot in the groin, and he had been sent to the Heidelberg Military Hospital.”

“Do you want us to do anything now?”

“I would like you to come down with me around the camp. I am short staffed here.”

Constables McAvoy, Banks and Hodge walked with the Captain and the Italian interpreter through the camp. The Captain ordered a number of prisoners who were walking around to return back to their huts. The camp was quietened down, and all lights were turned out. 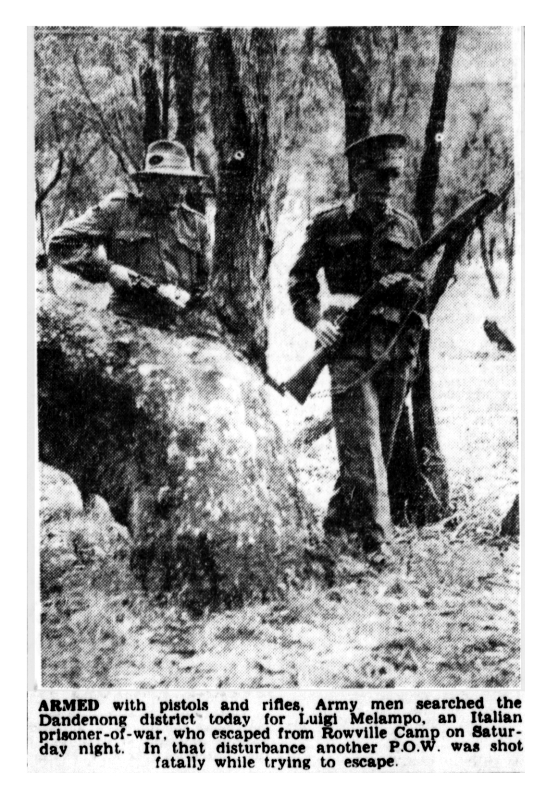 Rowville is located in the Eastern suburbs of Melbourne and was once a small farming community. The nearest major township at the time was Dandenong. The Rowville Italian Prisoner of War Control Hostel was an unguarded camp and was bounded by a simple wire and stump farm style fence. In 1946 there were approximately 250 prisoners interned at Rowville. The camp was overseen by Camp Commandant, Captain John Waterston.

Rodolfo died later that night from a gunshot wound. Rodolfo Bartoli was twenty-six years old when he died. His military record shows that he was from Florence and prior to the war had been employed as a Civil Servant. He was a Private in the Italian Infantry and was captured in Libya on the 10th of December 1940. Rodolfo arrived in Sydney aboard the Queen Elizabeth on the 15th of October 1941 and was interned at the POW camp in Cowra, New South Wales. In August 1944 he was relocated to Murchison in Victoria and then to Rowville in December 1944. Apart from one week at the Kooweerup Camp, Rodolfo spent the rest of his time at Rowville. Rodolfo was 5 feet 10 inches tall (178 centimetres) and was well liked by prisoners and staff in the camp. Rodolfo had been employed in the Camp Quartermaster Store at Rowville where prisoners could request uniforms or supplies when required. Rodolfo had met a young woman on a nearby farm who he was hoping to one day marry. A small number of the prisoners were aware that he had a bicycle hidden in some scrub by the bank of the Dandenong Creek just south of the camp and, on occasion, he used to leave to camp on his bike. 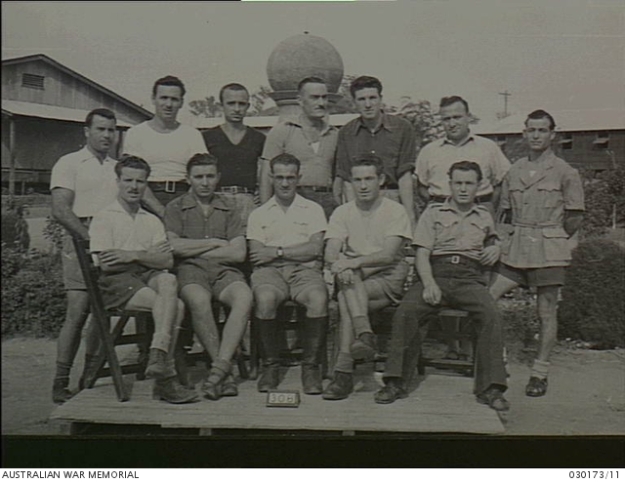 Rodolfo Bartoli: back row, third from the right.

Three days before the shooting, at the request of the Minister for Army Minister Forde, the Army commenced an investigation into the alleged mistreatment of Italian Prisoners at the Rowville Camp. This was in response to a written complaint about the treatment of prisoners at the Rowville Camp from a member of the public which had been forwarded to Minister Forde. With this inquiry already underway, the shooting of Rodolfo triggered a chain of inquiries and inquests which lasted until December 1946. There was a Military Court of Inquiry, a Police Homicide Squad investigation, a Coroner’s Inquest, an Independent Government inquiry into the shooting and the administration of the Rowville Camp and finally, two Court Martial trials. Some disturbing stories about the mistreatment of prisoners, abuse of prisoner’s rights, suppression of written complaints from prisoners, discrepancies in evidence in the number of shots fired at Rodolfo, disputes about where Rodolfo was standing when he was shot and a lack of clear understanding of the camp boundaries began to emerge.

These events took place after the end of World War Two as the Italian prisoners were awaiting to return home. Most of the prisoners from the Rowville Camp returned home to Italy in January 1947. Rodolfo is one of the 129 Italian’s who died in Australia during World War Two resting at the Ossario at Murchison. 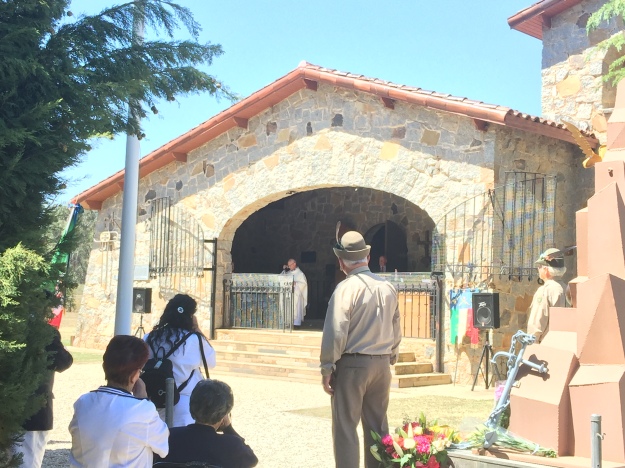 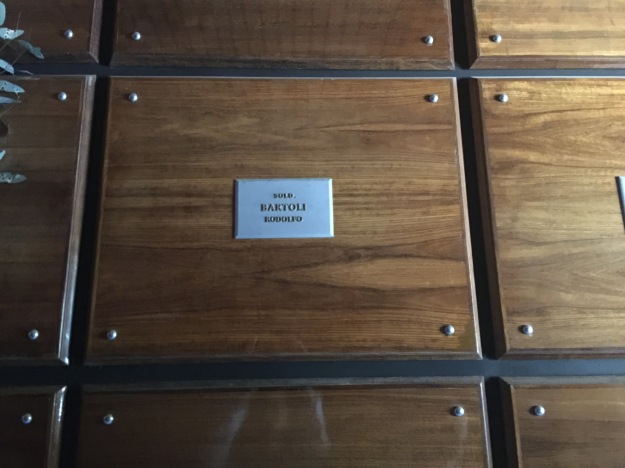 Photographs by the author at the Remembrance Day ceremony at the Ossario, Murchison Cemetery November 2018.

Letter of Appointment – Appointment as investigating officer into the allegation of ill-treatment of prisoners of war at PWC Hostel, V.22 Rowville.

Gennaro Quintigliano was posing as a Greek national when he was recognised in Adelaide as an escaped Italian prisoner of war 7th February 1946.

Gennaro had escaped from Rowville Hostel Victoria on 30th December 1945.
This was a well-planned escape. It was reported that he had travelled first class by train from Melbourne to Adelaide. In his possession, he had Australian currency, an identity card and clothing coupons in his Greek alias and a plan to purchase a ticket for a steamer to Europe.
Gennaro Quintigliano was unlucky. Ex-Sergeant Leo Guinoy of Glenelg South Australia was walking down King William Street Adelaide during his lunch hour when he saw Quintigliano. Guinoy had been assigned as a sergeant in the Intelligence Corps at Murchison Camp Victoria.
Guinoy was quite possibly the only Australian in Adelaide to know Quintigliano and by sheer coincidence recognised the escaped prisoner of war.
Guinoy said that Quintigliano had an amazing knowledge of Australian slang and spoke quite good English. Quintigliano a powerfully built six-footer, offered no resistance and was reported to have said to Guinoy, “Well I am the stiffest man.”

This was his second escape, having previously escaped from the Kyneton district in July 1945. He escaped a third time from Rowville Hostel in June 1946 and was recaptured in Sydney on 13 January 1947.