This story started with George aka Giovanni Ragusa, Italian Prisoner of War on Eric Behrendorff’s farm outside of Boonah.  At 94 years old Eric had clear memories of George that he shared with me for this project.  In 1944, Eric was  a young farmer of 22 years while George, slightly older at 32 years was also a farmer from Calascibetta on the island of Sicily. 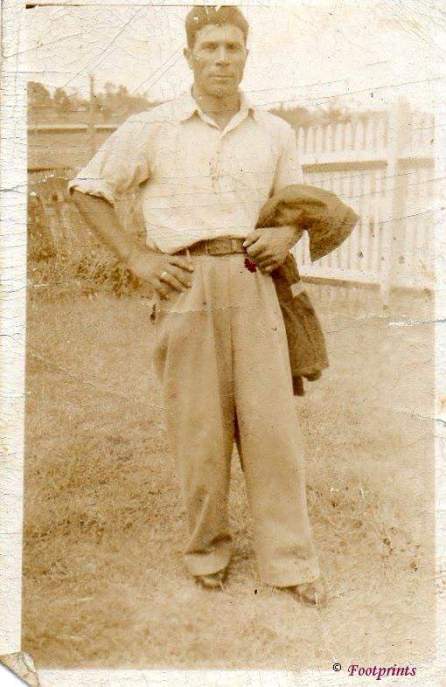 Fast forward 72 years and the story entitled His Name was George has connected Australians and Italians once again.  Antonio Ragusa, son of Giovanni has shared this father’s memories as a thank you to the Behrendorff family.  Antonio writes, “Dad never spoke of his imprisonment.  We knew he had been captured in North Africa and then sent to India and finally to Australia.  He worked in what he called ‘British labour camps’.  He learnt a little English and also to  strum the guitar.  He never played the guitar at home, but every so often he would say an English word.  We understood that he had a great nostalgia for Australia and the children.  Dad returned to Calascibetta and to his life as a farmer.  He married my mum in 1953 and then my brother and I were born.  In the mid 1960’s we moved to northern Italy where dad worked as a labourer until retirement.  He died in 1999, a month and a half after my mum died.  He had just turned 87 years.  In his personal papers, he have a small number of photos taken at the time he was working on a farm.  We did not know who the people were in the photo but we knew that that dad had a special connection to this family”. 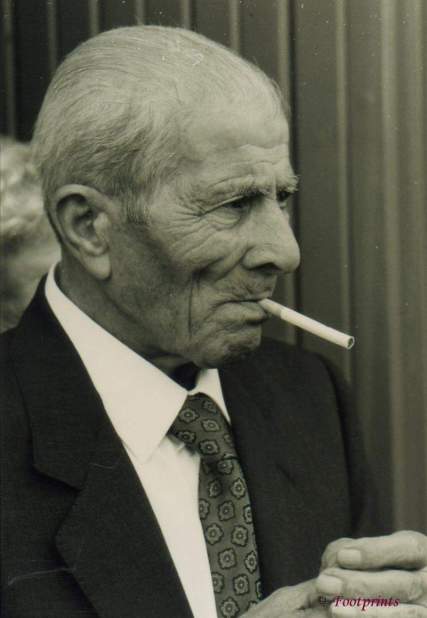 After 72 years, Antonio Ragusa now knows the names of the people in the photos, thanks to Eric Behrendorff’s son David.  Antonio also now has details about his father’s movements between North Africa and Italy. 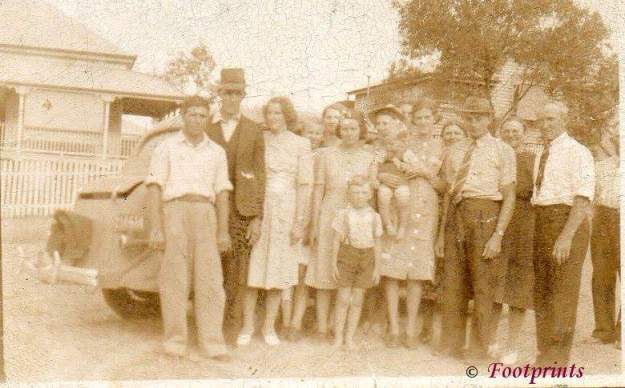 Antonio says, “Grazie a te, mi hai fatto conoscere ancora meglio mio padre… thanks to you, I know my father better”.  Once upon a time language was an insurmountable barrier, but translation programs has aided the Ragusa and Behrendorff families  to communicate and exchange stories and memories of a time when an Italian POW nicknamed George worked on the farm of Eric Behrendorff. 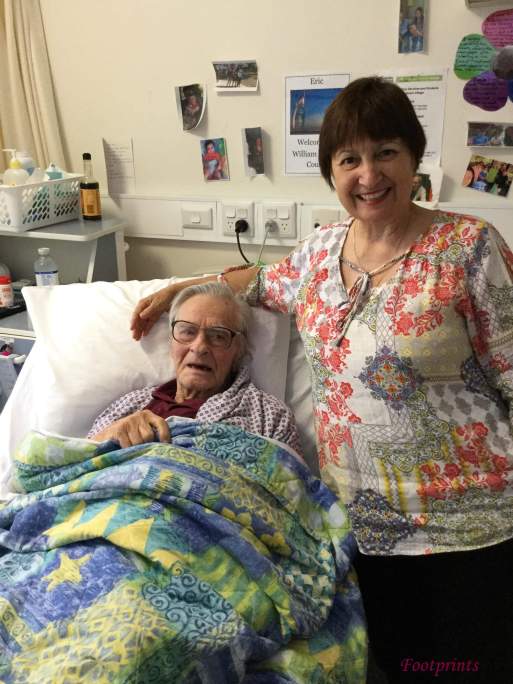 In October 2017, I had the pleasure of spending time with Eric. Eric spoke with melancholy of those war time years.  A time when you were scorned because you had a German surname, a time when you had charcoal burners fitted to your trucks to ‘power’ them and a time when ‘George’ was brought to a farm out Boonah way.

Eric said that sometime after George left the farm, he planted an avenue of olive trees.  Maybe George had  told him they would grow well or maybe they were a gentle reminder of a time when Italian prisoners of war worked on Queensland farms. 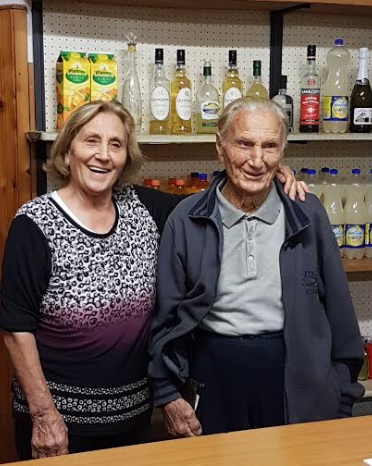 Tim Dwyer had heard his father’s stories about the Italian prisoners of war on their property at Aratula during WW2. He knew their names and a little bit about them, but it wasn’t until he took over from his mum, as letter writer to one of the POWs, that he appreciated the bonds of friendship formed over 65 years before. 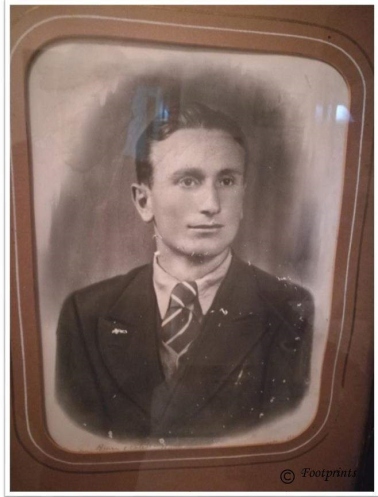 Tim continued to write to Ferdinando Pancisi (known as Ferdy) from 2010 but the ceasation of replies from Italy in recent years signalled the end of a era.

In a tribute to his parents and Ferdy, Tim while on holiday in Italy in 2017, decided to visit Ferdy’s village Civitella di Romagna.  With an envelope in his hand and very basic Italian, Tim asked a lady in the street for directions to the address written on the paper.

With much gesticulation and explanation,  Tim’s village guide understood he was “The Australian” and knocked on a door and roused 100 year old Ferdy. 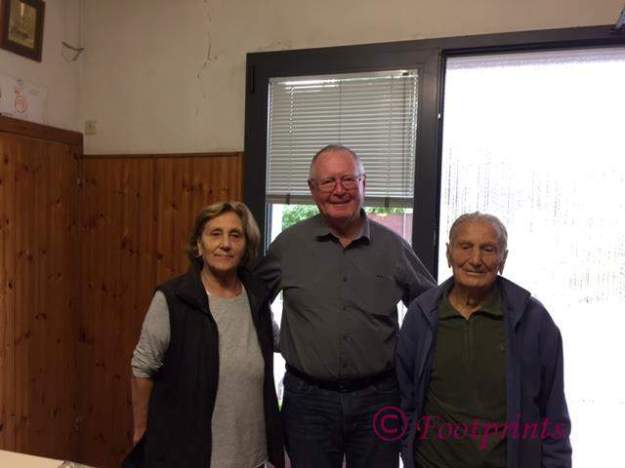 (from the collection of Tim Dwyer)

Finding Ferdy was like finding treasure and Tim left Civitella di Romagna with a heavy heart.  There was much he wanted to say and questions he wanted to ask but his holiday schedule and language were against him.

Realising the importance of capturing the memories and stories of Ferdy, not only of his time with the Dwyer family, but also his time as a soldier and prisoner of war, Tim engaged the services of Tammy Morris, a Kiwi living in Tavarnelle, Chianti.

The legacy of friendship between an Italian POW and the Dwyer family, is the capturing and recording of this vital first hand account of the life of an Italian soldier and POW.  Read the full story: PANCISI Ferdinando.

Tammy and her husband Nicola Cianti arranged to visit Ferdinando, tape his memories, transcribe them then translate them.  Tammy said, “Ferdinando has an extremely fresh memory and is an energetic and jovial person!”

Ferdy walked back in time and explained about his time as a soldier and medic in Libya, his capture, working in the hospital in a POW camp in India,  his first impressions of his farm boss (Tim’s father), his return home and almost emigrating to USA and Ferdy sang  SOTTO IL CIEL DI BANGALORE.

Ferdy reflected about his return to Italy in 1947,

“They prepared my bed, heated it up for me.  I had a warm welcome, felt cozy, happy to be home. The only problem was that when I woke up in the morning, I felt kind of out of place! I was used to moving around and seeing the World. How was I going to make it here? I was feeling a bit like a fish out of water! This little village was too small for me!”

Even as a young man, Ferdy had a gift for wise words and in a letter he wrote to Pat Dwyer in 1946, he sends a message: ‘A cheer up to Pauline! Tell her she should be glad because youthness passes away like a wind and nobody can’t stop it’.

When talking about Tim and Cathy’s unannounced visit, Ferdy’s philosophy on life is revealed: “You see, this is the joy of living life -when you don’t know what kind of surprise is coming your way, making each day a pleasure”.

And quite possibly Ferdinando Pancisi’s philosophy and positivity guided him through those difficult war years.

I congratulate Tim on his efforts to co-ordinate a remarkable mission to capture Ferdy’s memories. I thank also Tammy Morris  and Nicola Cianti for realising the importance of Ferdy’s journey as a soldier and prisoner of war and their willingness to record this history. 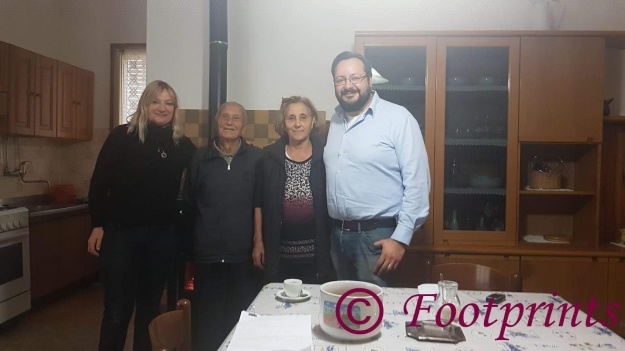 I would like to introduce you to 101 year old Ferdinando Pancisi. Ferdinando (Ferdy) has lived a full life; in more ways than one. Life events saw him journey from his home in Italy to Libya to Egypt to India to Australia and then home to Italy. Like the majority of Italian prisoners of war sent to Australia, they were absent from Italy for seven years.

Ferdy settled in the village of Civitella di Romagna with his wife Anna; both work in their small convenience shop. With age comes wisdom, and his sage insights were shared in 2017, when he was interviewed .

Longevity also relates to the duration of a special friendship between Ferdy and his Boonah family: The Dwyers. A bachelor, Pat Dwyer applied for prisoner of war workers and Ferdy was sent to his Fassifern farm. Ferdy left the farm on 2nd February 1946 and Pat Dwyer wrote to him soon after. And so began a correspondence that has continued through the decades. Ferdy’s response to Pat’s first letter is typed below…

Ferdy and Pat shared their family news throughout the decades. Pat’s wife Joie took on the role of letter writing after Pat died and then son Tim has taken on this role in recent years.

For over 73 years Ferdy and the Dwyer family have sent letters, cards and photos back and forth across the decades and across the miles. I would think that their situation might be unique.

Seventy three years is a long time: a special connection between farmer and Italian POW; a tangible link between two men from different walks of life; a personal history of war and friendship; a heartwarming story of Ferdy and the Dwyer family; a connection that goes beyond the backdrop of war.

a unique friendship in many ways

When I started this project, I had a firm belief that there was concrete evidence of the presence of Italian POWs in Queensland. John Oxley Library holds three photos of Italian POWs at Bill Beattie’s farm at Calico Creek via Gympie.  I hoped to be able to add to this collection and my aim was to find the POWs ‘footprints’ and photos seemed the obvious records to survive seven decades.

So Pam Phillip’s photos of the concrete footings for a windmill on her father, Ron Niebling’s farm at Moorgoorah were ‘footprints’ I didn’t expect to see.  But there they are, footprints captured in concrete. 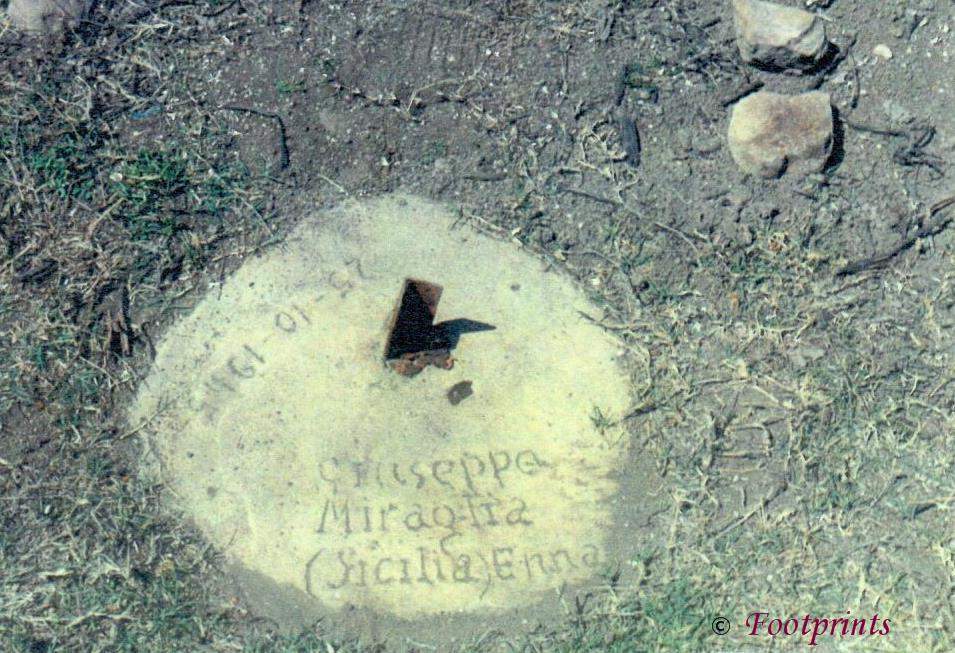 In  the good times, plentiful rain keeps the Moogoorah Lake full but in drought, as was the case in 1995, the lake offers up its secrets and treasures. 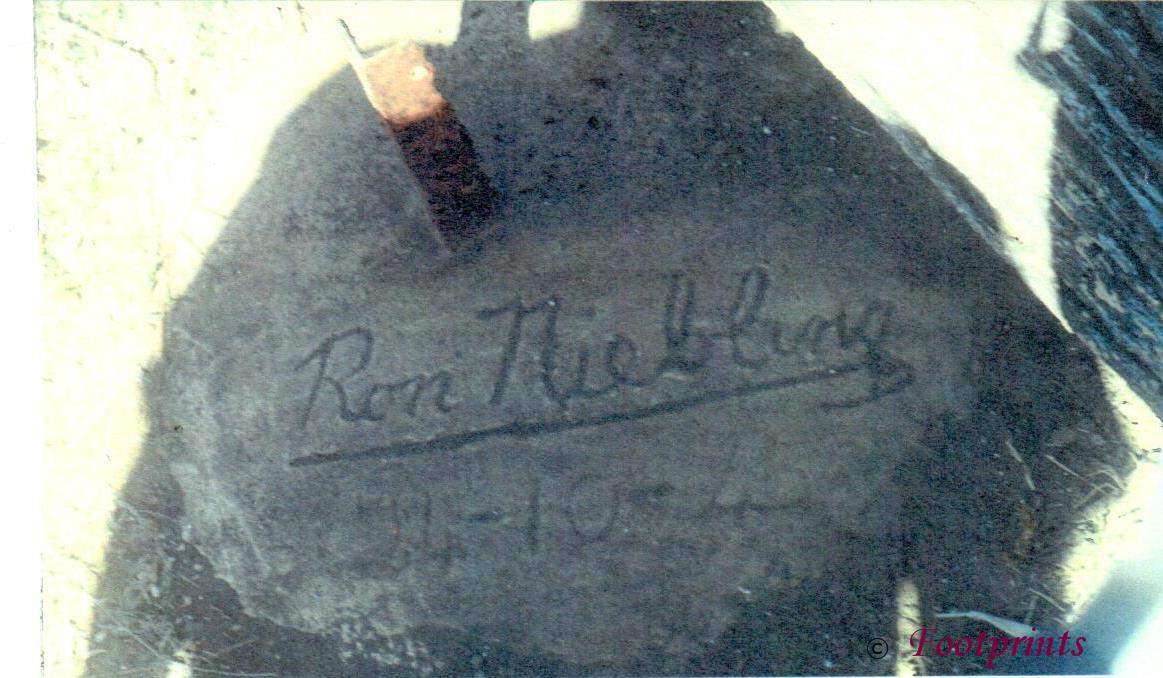 Luigi Tommasi is researching his grandfather’s journey as an Italian soldier and prisoner of war during WW2 and his search has brought him to Boonah.

Luigi’s grandfather Salvatore Morello together with Pietro Pepe, both from Castri di Lecce were captured in the Battle of Bardia: 3 – 5th January 1941.  Together on 29th July 1944, they were sent to the Q10 Prisoner of War Control Centre for allocation to farm work.

Their first placement was on the farm of G. Bartholomew.  In the first week of September 1944, both men were sent to the Boonah Hospital. It is possible that Salvatore and Pietro were reassigned to another farmer after their release from hospital.

Luigi remembers, “My grandfather said he had worked at a large farm in Boonah, which used the tractor to reap the hay and a horse to gather the cattle. If I remember correctly the horse was white, to which he was very fond of. His work also included milking dairy cows and raising cattle, sheep and pigs. He also told us that the owner of the farm was lame.”

Salvatore’s time on Boonah farms was barely eight months as due to ongoing medical issues and chronic appendicitis he returned to Hay Prisoner of War Camp and further hospitalisation.  “My grandfather spoke with fondness about his time working on Australian farms, I always thought that he was on farms for much longer.  I think he was well treated because he had good memories.  We had no idea where in Australia he was sent, but with thanks to Joanne Tapiolas, we now know this place was Boonah,” Luigi said. 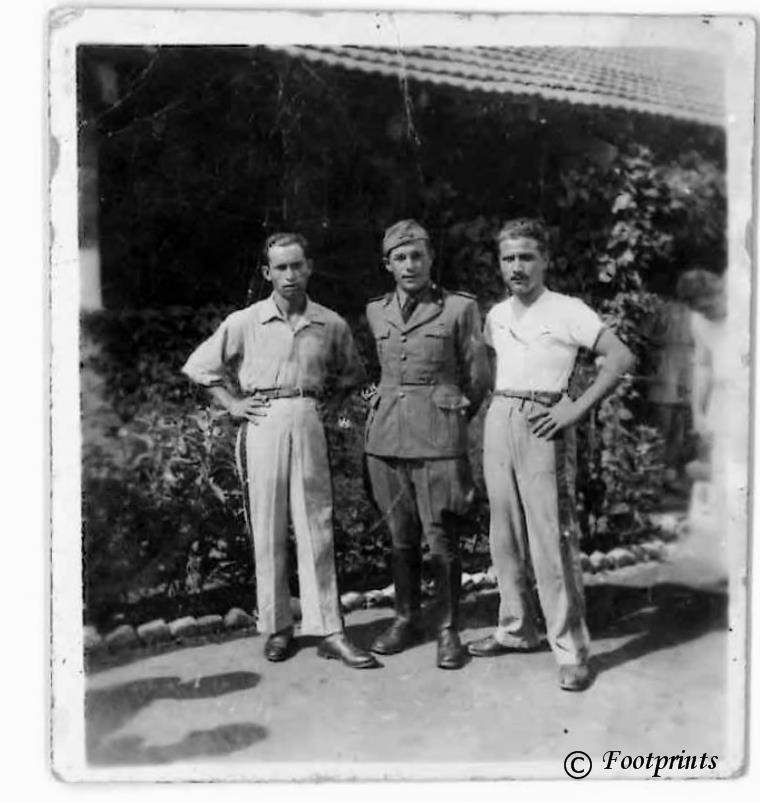 Luigi has contacted researcher Joanne Tapiolas, to assist him with his quest.  “This journey is an emotional one for Salvatore’s daughter, Antonia.  Her father left home in 1939 and did not return until 1947. Eight years, is a very long time for a little girl.  Helping Luigi and Antonia is an extension of the research project into the history of Italian prisoners of war in Queensland.  There is an increase in the number of people in Australia who are tracing their family history, so it comes as no surprise that Italian families are also interested in the history of their family members,” explains Tapiolas.

If Boonah locals can assist Luigi Tommasi  in any way, Joanne Tapiolas can be contacted at joannetappy@gmail.com  Further information on the research project can be found at italianprisonersofwar.com