The Italians soldiers, airmen and sailors who were captured from December 1940 to February 1941,  believed the propaganda promises that the second advance would arrive quickly to liberate the increasing numbers of prisoners of war. This was not to happen.

Another insult was that they felt betrayed by the Italian Commanders.  Before capture, the soldiers were ordered to destroy everything. The belief was that the enemy would not take any of the supplies.  Water tanks were tainted with oil and food supplies destroyed. How then were the Allies expected to conjure food and water for 40,000 prisoners at Bardia? This order to destroy Italian provisions contributed to the deaths of Italians from starvation. The other betrayal was that the commanders ‘vanished’ so as to evade capture.

Ferdinando Pancisi remembers, “We hadn’t eaten for days. Food wasn’t arriving. We tried our best to survive. We were trying to make do looking for food on one side or the other of the Front, looking everywhere that we could and we survived. Well those who managed, survived, many others didn’t make it. I went for 7 days and 7 nights without food or water because the English were not giving us anything. I tried asking a British guard for some food or water and he’d always reply “tomorrow, tomorrow”. For 8 days we were kept at Bardia. Then they moved us to near Alexandria in Egypt near the SuezCanal. Every now and then they would send some of us to some part of the World.

For me, India. I was trying to depart, I wanted to go. I was trying to get out of there. People were dying of starvation, there were fleas and head lice, we couldn’t sleep. It wasn’t a nice place to be.” 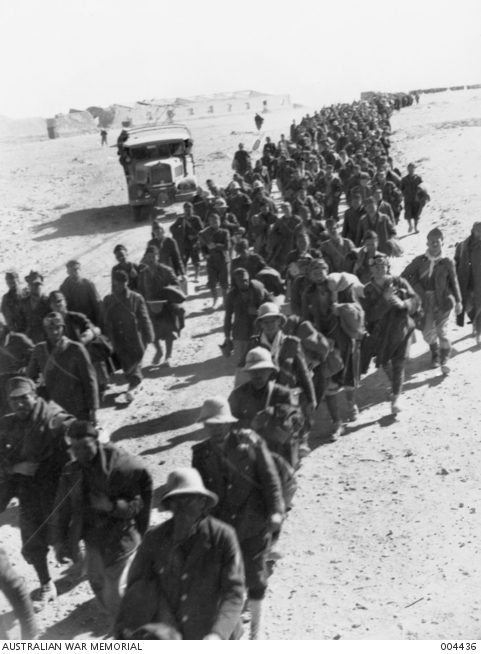 The Italian POWs also suffered from bombardments by the Germans.  Filthy, covered in lice and sand, hungry and thirsty, there are many testimonies that the Italians did not eat or drink for seven days. There was always a promise of ‘tomorrow’ from the British and Australia. 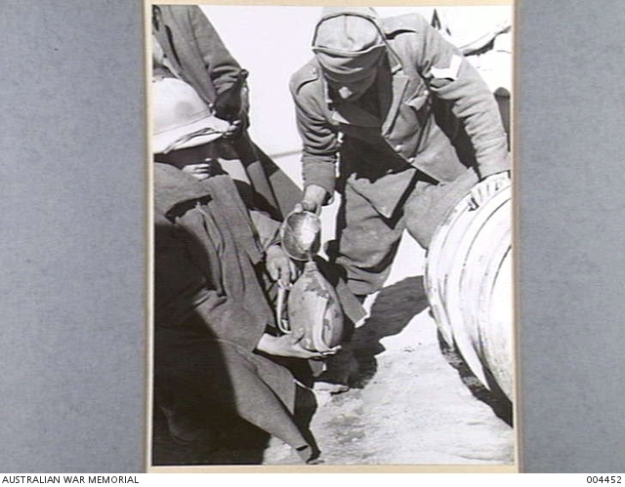 10th December 1940. WESTERN DESERT – THE MOST PRECIOUS COMMODITY IN THE DESERT….WATER. EVERY OPPORTUNITY MUST BE TAKEN TO REPLENISH SUPPLIES & THESE ITALIAN PRISONERS, ALTHOUGH THEIR WORRIES ARE OVER, ARE TAKING NO CHANCES OF RUNNING DRY DURING TIME OF WAITING TO BE SENT TO SOME COMFORTABLE PRISON CAMP. (AWM Image 004452 PHOTOGRAPHED BY F. HURLEY).

From places of capture the men walked to internment areas; caged compounds; and then to marinas at Bardia, Sollum or Tobruk.

“In fact, now prisoners they led us to Sollum and I stayed there for five days. Waiting for the propaganda promises of the Army that the 2nd advance that would come to free us. Hunger, the despair was so great and who knows the destiny what would have reserved for us. So from Sollum they transferred us to Mersamentuck in a concentration camp in Egyptian territory. From there they took us to the station and as beasts they put us in a freight train, and each wagon more than 40 -50 prisoners to reach a concentration camp along the Suez Canal.

The number of prisoners, which could not be counted, was high and I can affirm that the treatment for us was of the pitiful and inhuman ones that not everyone could sustain. In this field I stayed for about two months, then they took us to lead us to Suez and from there embarked on an English ship, think that in a hold, below sea level, worse than animals we were amassed in 700 prisoners. For nineteen days by sea we suffered that penance, until we arrived in Bombay in India and received another “moral slap”.” Domenico Masciulli

Loaded onto supply ships,  Italians were first used to unload supplies before embarkation. 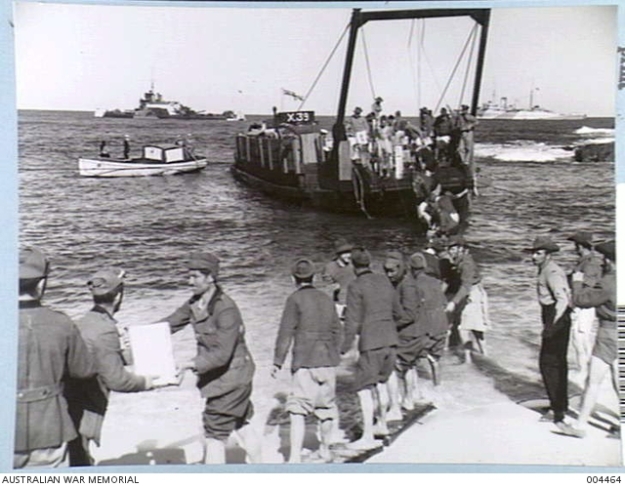 SIDI BARRANI – ITALIAN PRISONERS EARNING THEIR KEEP & HELP TO UNLOAD STORES FROM BRITISH SUPPLY VESSELS. LOWER RIGHT CORNER MEMBERS OF THE “COMMANDERS” – A SORT OF ENGLISH FOREIGN LEGION, WHO BECAUSE OF THEIR SLOUCH HATS ARE OFTEN MISTAKEN FOR AUSTRALIANS. (AWM Image 004464, PHOTOGRAPHED BY F. HURLEY).

One ship transporting 400 Italians from Libya to internment camps in Egypt hit a mine. Eight minutes from the first explosion, the ship sunk.  Casualties were heavy among the prisoners and Australian guard.  It was reported: “The prisoners were sitting on deck laughing and talking and playing cards…there was a thunderous explosion… the whole ship rocked and shuddered and stopped…and on the prisoners deck hell had broken loose. ..the water was full of prisoners full of fear.  They were clutching one another and screaming over and overs, ‘Madre, madre…’.  Italians too frightened to jump [into the water] were clinging to the rails and rigging as the ship’s bow canted high into the air. A mine sweeper collected the survivors and transferred them to an Australian destroyer.”

Some were shipped to Marsa Matruh (Mersa Matruh) and entrained to Alexandria: Film footage of the Italians on trains 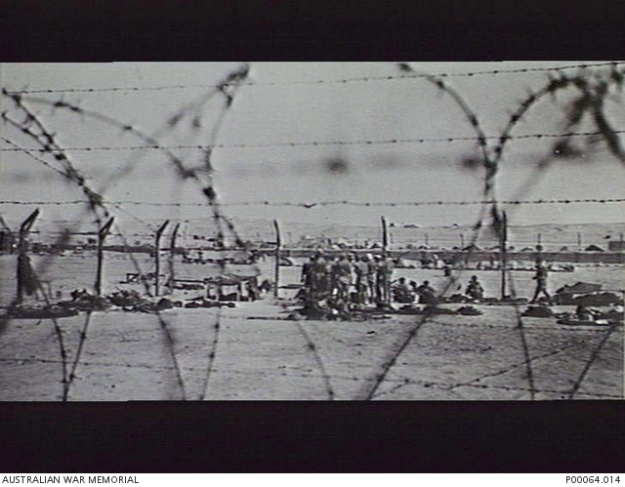 Others were sent directly to Alexandria. 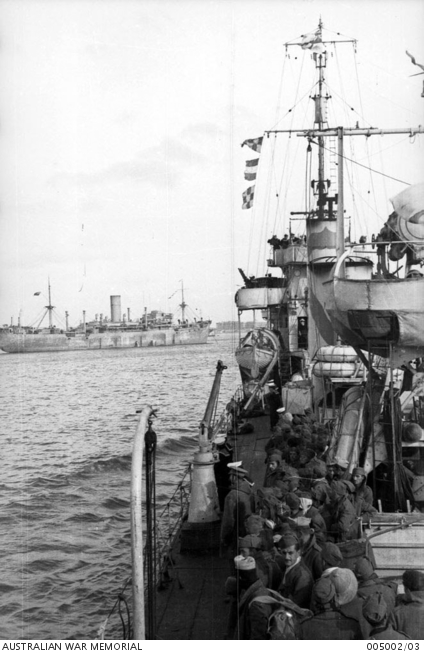 Recollections tell of being treated no better than beasts as they were loaded into train crates.   Sent to camps such as Quassassin or Ismailia the Italians eventually were sent to camps at Geneifa where they were officially processed.

In time they boardered ships at Suez headed for Australia or India. ‘Emanuele Favoloro a fishman from Lipari Sicily:  “…took us to Alexandria in Egypt. Here we were given a loaf of bread for tomorrow.  But we ate it instantly and starved fthe next morning.  We had plenty of water.  We got given five cigarettes and I sold my cigarettes for more bread.  My biggest horror from the war is the starvation and lack of water plus the horror of the deaths.  After six months in Alexandria, I was taken to Quassassin Camp.  We worked carrying light poles.  I was there six months and then I was shipped to Suez where I became ill and was left behind whereas the others went to Australia.” Favoloro Emanuele from Bocia Cesarin by Cesare Romane Stefanate. 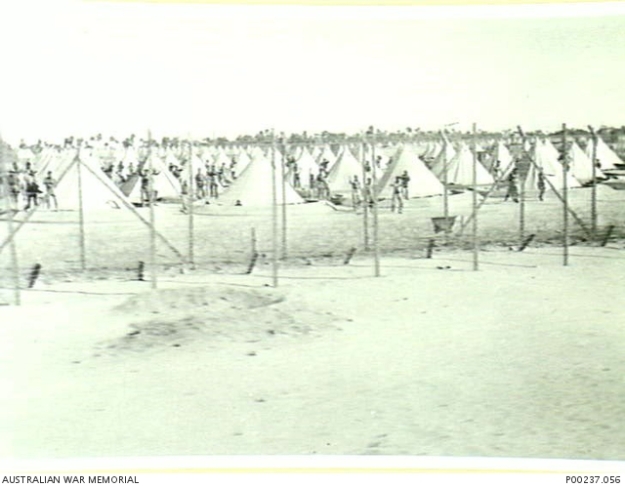 Luigi Bortolli kept a diary and detailed maps of Campo 9 Ismailia and Campo 2 Suez:  Luigi Bortolotti: From Tobruk to Clare.

Edmondo Mazzinghi Testimonial Yol-La mia avventura: is in Italian and includes numerous photos for his journey.

It was 1941 and those sent to Australia did not return home until January-February 1947. 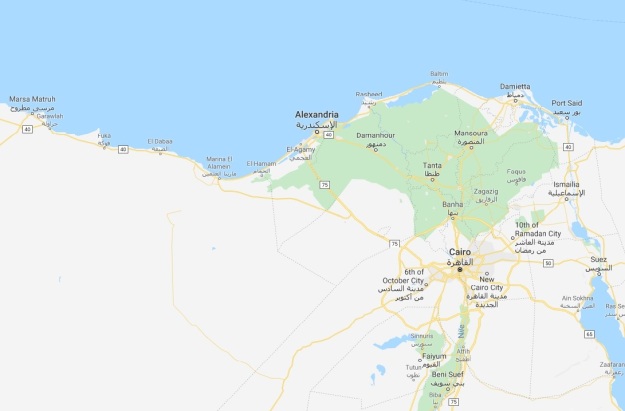