Nunzia Mattera wanted to know more about her grandfather Alfredo Mattera’s time as a prisoner of war in Australia.  Nonno Alfredo’s journey in Australia is complicated: Sydney to Hay to Cook to Murchison to Cowra to Moorook to V1 Hamilton to Melbourne. He would have seen much of the Australian countryside out the window of trains.

Moorook: what could I tell Nunzia about Moorook?  Very little, so a little research later…

Wood Camps were established at Katarapko, Woolenook and Moorook in South Australia.  The workforce was drawn from Japanese internees from Loveday Camp South Australia and Italian prisoners of war from Murchison Camp Victoria.  The three camps consisted of tented accommodation and buildings for messes and kitchens.  A six-foot barbed wire fence surrounded the camps. The main purpose of these camps were to fell trees, cut the timber and stack the wood into piles.  Wood was an essential fuel supply for industry.

3 May 1942: 108 Italian prisoners of war arrived at Katarapko Wood Camp for the purpose of wood-cutting under Capt Cl Williamson.  These PsW were a detachment from Murchison PW Group Victoria.

7 May 1942: 30 Japanese Internees were detached to Woolenook Wood Camp for purpose of woodcutting under Lieut EG Jones.

5 Sept 1942: Katarapko Wood Camp was closed and PsW now numbering 210 were moved by Paddle Steamer down the River Murray to Moorook for the opening of Moorook West Wood Camp situated twelve miles south of the river.

21 Feb 1943; The 201 Italian PsW at Moorook West were entrained at Yinkannie Railway Station for return to their parent unit No 13 PW Camp, Murchison. One PW died whilst at Katarapko and 8 had already been returned.  Moorook West Camp was now empty.

1 March 1943: 138 Japanese Internees from 14B Compound [Loveday] were sent to Moorook West Camp to continue the woodcutting started by the Italian PsW.

28 Jan 1944: Moorook West Camp was closed with the removal of the majority of the Japanese Internees to Woolenook Camp for continuance of woodcutting.

6 May 1945: 14 A Compound again occupied with the arrival from Woolenook Camp of 243 Japanese internees who were transported to Berri per Paddle Steamer and thence by road.  This was the closing of Woolenook Camp as part of Loveday Internment Group as it was taken over as a PWCH.

You will notice on Amorino’s card that the only reference for a South Australian work placement is: Detached to Loveday SA (Labour Camp) 2.5.42.  In 1942, only internees were resident at Loveday Camp.  Italian prisoners of war only transited through Loveday.  The card also shows that Amorino’s parent camp was Murchsion in Victoria. The Labour Camp was administered from Murchison.

Question: How do we know that Amorino was at Katarapko and Moorook Wood Camps?

Answer: The dates.  Compare the dates on Amorino’s card with the dates in the records about Loveday: there is a one day difference: the travelling time from Murchison to Loveday.

NB Many facilities had changes in function and residents.  Over time, there has been a blurring of the differences between prisoners of war and internees;  internees and members of civil aliens corps; transit camps, internment camps and prisoner of war camps; hostels and ‘bush camps’; hostels and control centres.

History: In view of the great shortage of civilian labour and the lack of sufficient fireood to maintain normal pumping facilities from the River Murray for the Irrigation Settlements at Renmark, Berri, Barmera, Cobdogle and Loveday, so that the huge quantity of dried and other fruit grown in these areas might be produced to keep a continuous flow of this type of foods for both the fighting services and the people of Britain, ti was decided to use Internee and PsW labour for the production of firewood.

A site was chosen for a small tented camp and compound to be constructed at Katarapko Island where there was an abundance of firewood.  As the Internees held at Loveday were subject to tropical diseases, the internees, until a later date were not permitted near the River Murray because of these diseases, and then only after they had been certified free of disease by a Medical Officer, it was decided to bring Italian PsW from Murchison Victoria… Unfortunately the camp had been badly chosen, as it was subject to serious flooding by the River Murray.  During one such flooding the camp had to be closed, and the members of the AMF, PsW, and stores were moved by River Steamer to Moorook where they disembarked on 5 Sept 42, and marched to a new camp site at Moorook West, twelve miles south of Moorook township.  PsW were used until 21 Feb 43 when they were returned to Murchison.

The PsW were replaced by Japanese Internees who remained at Moorook West until it was closed on 28 Jan 44.  all available wood this area had been been cut.  The Internees were then removed to Woolenook Wood Camp which had been in existence since 7 May 42 when it was established at Woolenook Bend on the River Murray, fourteen miles north of Renmark.  Woolenook was also a tented camp as regards sleeping quarters, as wood and iron buildings were only built for kitchens and messes.  Only Japanese Internees were used during the tenure of this camp as part of Loveday Internment Group.  this site proved admirable and much wood was obtained up till the time of its closure on 6 May 45.

Most of the wood produced was sold to Irrigation Pumping Plants at seven shillings pr ton at the stump on the forest floor.  River steamers and barges were the usual method of transportation to the several pumping stations. 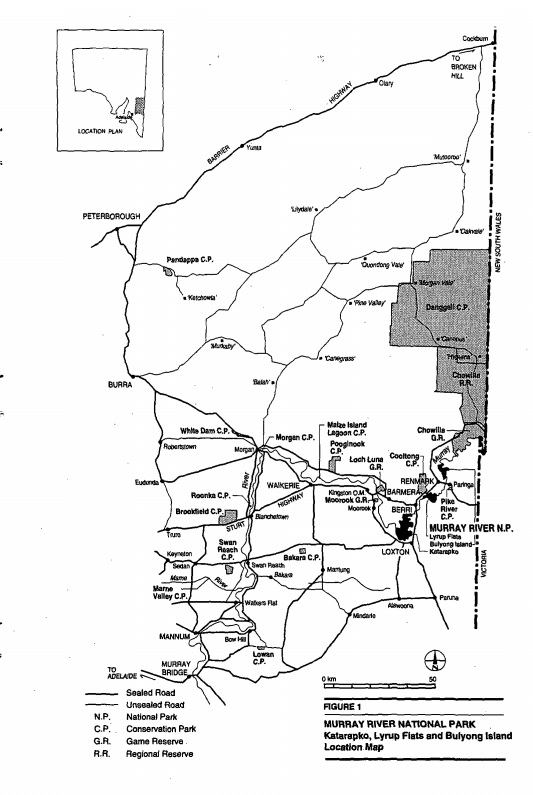