A photo, a banana farm, two names and a story of Italian Sailor POWs at Ross Creek via Gympie. 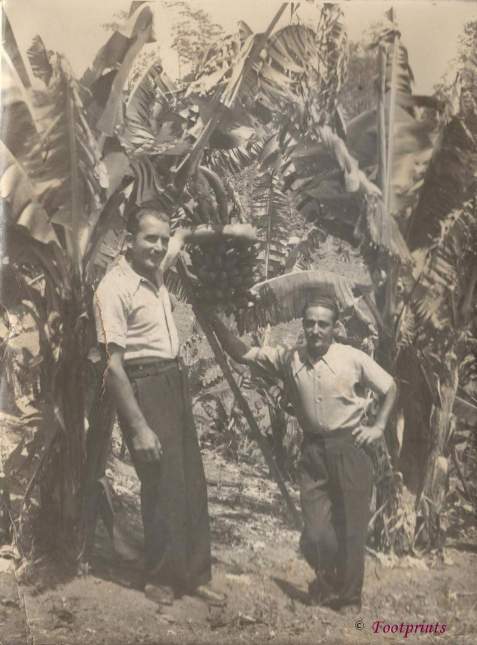 Tony Franco and Giovanni Irace at Ross Creek via Gympie

(from the collection of Kathy Worth (nee Knowles))

Kathy Worth (nee Knowles) is the keeper of a framed photo of two men standing beside a bunch of bananas.  Her mother, Ellen Knowles, carefully noted the names of the men on the reverse side of the photo and 72 years later this photo tells a story.

Clarrie and Ellen Knowles of Ross Creek Gympie grew bananas during World War 2.  At some stage, they also grew beans between the runs. On 14th May 1945, two Italian POWs were sent to the Knowles farm and took up residence in the workers’ shack on the farm.

Both from the Amalfi Coast of Italy, Antonio Franco was from Maiori Salerno and Giovanni Irace was from Praiano Salerno.  Kathy remembers Tony and Giovanni from the stories her parents told her and she says, “Dad loved fishing and would take them to Tin Can Bay fishing with him but apparently they were not to leave the farm.  The ‘Ities’ as Dad called them ran out of milk one day so he went and milked the draught horse and they commented how sweet it was and he told them it was mare’s milk which caused a laugh.  They were frightened of fire flies as well.  Dad said that when they saw fire flies for the first time they were scared.  They told Dad how they called into the night, ‘boss, boss, is that you boss’.  Mum remembers that they didn’t want to go back to Italy”.

Delving further, the back story to Giovanni Irace and Antonio Franco coming to Australia is noteworthy. The last transport of Italian POWs to Australia was the General William Mitchell arriving in Melbourne; the 2076 Italians on board disembarked on 13th February 1945.  Two hundred and fifty were sent to Gaythorne in Queensland arriving on 13th March 1945 for onward placement on farms.  Irace and Franco were placed on Clarrie Knowles’ Gympie farm within two months.  Other Italians were encamped at Gaythorne for five months before placements were arranged to work on farms.

Another interesting point of history is the place and date of capture for Irace and Franco.  Both sailors in the Italian Navy, they were captured at Massaua (Massawa) on 8th April 1941.

The location of the squadron meant it was isolated from the main Italian bases in the Mediterranean by distance and British dispositions. The British capture of Massawa and other Italian ports in the region ended the Italian naval presence in the region in April 1941.”