By the time Filippo Granatelli arrived in Australia in February 1945, he had already served 6 years in the Italian army, had been captured in Asmara  Eritrea on 6th May 1941 and spent close to 4 years in POW camps in India.

On  20.2.45, an Australian War Diary communicates, “350 Italians to SA for onward movement to WA.”  The date is significant: it was Filippo’s 30th birthday.  He had arrived in Melbourne on 13.2.45. This was his first birthday in Australia.

In Western Australia he is sent to the Karrakatta Hostel, the Bunbury Hostel (State Forestry  firewood cutting and Department of Agriculture, hay harvesting, potato digging) before working on a farm in the Moora district (W25).

But what of the young men like Filippo who fought Mussolini’s war in Eritrea?

Filippo kept a small number of photos from this time which gives us an insight into these young men and a very special thank you to his son Veniero for sharing these photos.

Cappadocia was one of the training camps for Filippo during his compulsory military service.  The above photo and the certificate below, reminders of  22 year old Filippo’s youth.

War and imprisonment were to shape many young men’s futures. 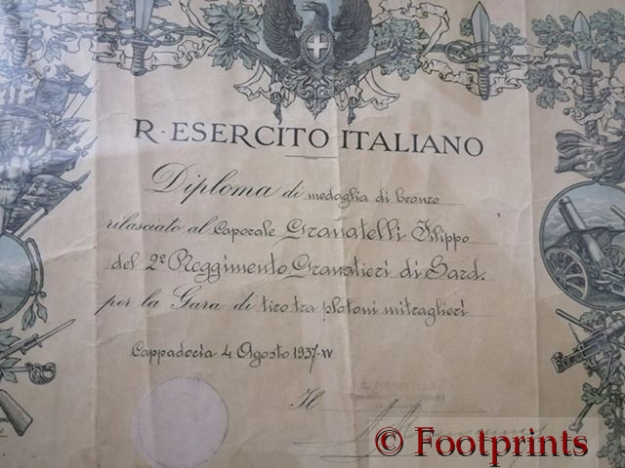