One type of prisoner of war uniform is the light-coloured shirt with the black diamond patch on the back and the light-coloured trousers with black stripes down the outside leg. This uniform can be found in the photographic records:

Cowra, NSW. 1944-02-03. Italian prisoners-of-war from No. 12 Prisoner-of-War Camp using a heavy duty pulley block and tackle to pull down a large tree in a paddock near the camp. (AWM Image 064137, photographer Geoffrey McInnes)

one uniform has survived the passing of time.  The uniform was saved from a bonfire of disposal prisoner of war uniforms by a camp guard. It is now in the hands of Anthony who has graciously shared photos.

Anthony has also shared photographs of Prisoner of War Capture Tags. Printed by the US Government February 1942, they raise the question:
Was a similar tag used for those Italian prisoners of war captured 1940 and 1941? Looking through archived photos of Italians captured at Sidi el Barrani, Bardia, Tobruk and on the move in Palestine, no capture tags are seen. Did the British forces in Libya, Eritrea and Ethiopia use capture tags?

It would be interesting to know if any Italians wrote about the capture tags in their journals or memoirs.

Dark red shoulder strap with a button hole at the end. The button hole and the edges of the strap have been reinforced with khaki cotton.

A predominant memory, if little else is remembered, is that the Italian prisoners of war were dressed in red.  A number of hues are recalled: red, burgundy, maroon, claret, pink and orange but the official term was ‘magenta’.

The colour was conspicuous, to make POWs stand out in a crowd.  POWs and internees were dealt the same humiliation: army issue clothing which had been dyed magenta.

The Italian prisoners of war objected against the dyeing of their clothes ‘burgundy’ but authorities responded with a practical answer… it was the only colour that could dye khaki.

The above shoulder strap is a remnant of one such POW magenta-dyed army issue, held in the heraldry collection of the Australia War Memorial. Its description is as follows:

“This shoulder strap was part of a scrap book put together by Eastern Command Salvage and Recovery Section in the early 1940s. The strap is taken from a uniform jacket issued to enemy prisoners of war and civilian internees held in Australian camps during the Second World War. The Salvage and Recovery Section were responsible for collecting and repairing unserviceable Australian army khaki uniforms, repairing them, and dying them the distinctive maroon that was required uniform for enemy prisoners of war. It was found that the section could carry out the work for far less cost than a civilian contractor.

Until 1942 there were not enough surplus uniforms available for dying and issue to prisoners of war or internees. Internees were required to bring their own clothing into camp and prisoners wore the uniforms in which they had been captured supplemented by civilian issue clothing.

From 1942 both groups were required to wear the distinctive red issue clothing, which was produced in both uniform and civilian styles. Generally speaking, prisoners of war were allowed to retain their own national headdress until it wore out. The compulsory wearing of red clothing by civilian internees varied from camp to camp and seems to have been at the camp commandants’ discretion. Many commandants found that civilian internees worked better when allowed to wear their own clothes, but others insisted they wear red as the prisoners of war were required to do”.

Another reference and more personal reference to the clothing is from internee, Peter Dalseno who wrote the following in Sugar, Tears and Eyeties:

“The officer signalled him on to the next table where he was allotted one overcoat, two shirts and two pairs of trousers – dyed a rich burgundy hue not dissimilar to wine aging in casks.  The name tags affixed to the garments – the property of previous soldiers – had not been obliterated…. Then came the pair of singlets, longjohns and socks and army boots that carried no name tags but showed signs of considerable wear”.

From the Australia War Memorial also comes the photos below.  Italian internees at Loveday dyed their uniforms and Army staff working at 3rd Salvage Depot are photographed dyeing salvage uniforms which were possibly used for the Italian POWs. 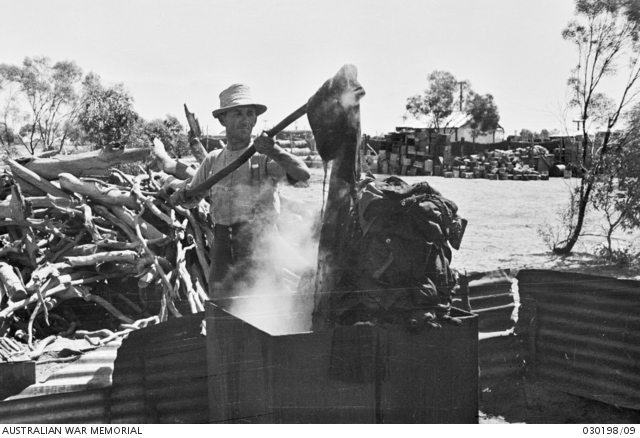 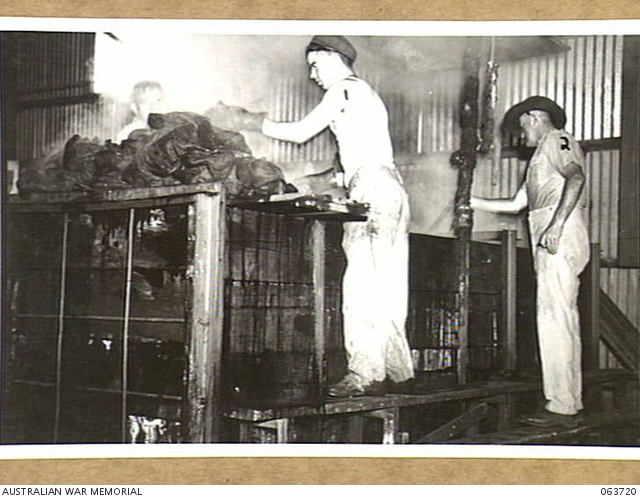