With few men available for farm work, Bernard Mason signed up to employ Italian prisoners of war mid 1944. On the 8th June 1944, Mario Mercuri and Guido Vaccarini were escorted to his property at Lagoon Pocket by military staff.

By the time Mario and Guido arrived at the Mason’s property, they had left their footprints across four countries.  As POWs, they had spent time in temporary caged compounds in the deserts of North Africa, POW camps on the Suez Canal; in India and Cowra Australia.  The war had gone badly for Italy in North Africa and Guido and Mario were but two of the 350,000 Italians captured in the North African campaigns. For 19 brief months, they lived and worked at Lagoon Pocket, settling in quickly to the daily routine of farm life.

Farming life was never easy in those times.  Petrol rationing meant that farmers became charcoal burners, making charcoal as a fuel to power trucks. Tractors were non-existent and the ploughs were pulled by horses. Farm work was hard, manual work.  Gympie farms did very well during the war, provided that they had workers.  Troop trains came through Gympie on a regular basis with fresh produce sold directly to the army.  Gympie being well situated supplied fruit and vegetables directly to the southern markets of Brisbane and Sydney.

Bernard Mason grew a diverse range of crops and also branched out into a macadamia plantation.  Pineapples, papaws, carrots, beetroots and cabbages were some of the fruit and vegetable crops produced on the farm. Bernie also had another 40 acre property from which he pioneered the macadamia industry.  At the time, there was no interest for ‘bush nuts’ and the Department of Primary Industry had little information about its commercial viability.  But Bernie with the assistance of the ‘Ityes’ planted 800 macadamia seedlings which in time was known to be the largest macadamia seedling plantation in existence. Nowadays, macadamia plantations use grafted trees.  Bernie would go up into the hinterland of the Sunshine Coast around Eumundi and Mapleton to collect the nuts for seeds.

(from the collection of Barry Mason)

It was in this bucolic setting that the POWs became part of the Mason family.  Barry Mason, born November 1939,  was only a child at the time, but he remembers the men well: “They treated us kids well.  I remember how they would put my sisters in a fruit basket and carry them around. And they played games with us.  Dad bought them each a watch and push bike.  There were rules about when and where they could go on their days off, so I suppose this is why he bought those items for them.  They made no attempt to attend church, and I remember a story about Guido and church.  Apparently, he told dad, ‘No church. Madonna no think of me. Me no think of Madonna’.  And there was the story about the POWs at the Butler vineyard.  Jack Butler had the Italians prune back the vines and had a fit when he saw what they had done.  They had cut them right back and Jack believed that they had ruined his vines.  As it turned out, these POWs knew more than a little bit about vineyards and the next crop was the best crop every grown on the farm.”

Another anecdote about the ‘Ityes’ at the Mason farm centres on ‘the still’.  Barry reminisces, “They set up a still to distil alcohol.  I am not sure where all the bits and pieces came from, but they used a milk separator bowl to boil the fruit in.  They used pineapple skins and no doubt other fruit.  They had a coiled pipe and the vapours would go up into the coil and came out a crystal clear toxic liquid. They could turn their hand to most things, although I am not sure that this was ‘allowed’.”  Lots of memories surface about those times and Barry relates a common joke of the day, “I don’t think there was any malice in the words but it went like this: ‘How would one describe ‘tall inebriated Italians?  Hi(gh) tiddly I-tyes’!”

It was however to be a near tragedy that cemented a lifelong friendship between the Mason family and the Vaccarini family. Guido saved the lives of Bernie’s two daughters, Valda and Rae. The girls had been playing in the cabin of the Ford V8 truck when they were rendered unconscious by carbon monoxide.  Bernie, Guido and Mario were in the packing shed when Guido realised he could not hear the girls.  He told Bernie, “Boss, bambini quiet… Mister, no hear bambini” adding “Mister, mister, I go see why no hear bambini”. Giudo had found the girls slumped and unconscious in the truck’s cabin. The girls were removed from the truck and laid on the floor of the packing shed and the Gran who looked after the children, felt all was lost and pushed Mason to the ground and said, “Pray, pray. Pray for the girls”.   Guido was loaded with one of the girls on the back of the truck and Mrs Mason in the cabin with the other lifeless girl.  Bernie had said, “It was the longest 8 mile I have ever driven.  But God must have heard my prayers”. The rush of fresh air across the face of the little girl on the back of the truck stirred her but it wasn’t until they arrived at Dr Warrener’s in Gympie, when a nurse revived the other child, that the family knew both girls were safe.  The doctor said that without the action of Guido, the girls would have died as had the girls inhaled the carbon monoxide for another few minutes, they would certainly have been dead.

After his repatriation to Italy in 1947, Guido wrote to Bernie in 1949 to ask for sponsorship to return to Australia. Bernie Mason said, “This, I felt was the least I could do because he was the means of saving our two little mites.” Guido arrived back in Gympie in 1951 and his wife Rina emigrated a year later.  Barry said, “When my dad died, the family wished for the graveside service to be private.  Guido asked to pay his respects to my dad and we decided that he deserved a place there.”

The Mason and Vaccarini families still reside in Gympie. Barry and Margaret live in Gympie and have become the custodians of the photos and stories of that time.  Valda married Duncan Polley of Polley’s Coaches and Rae married Gordon Saxelby and they now live in Bundaberg. Guido has now passed on some years ago.  In a fitting tribute to the close family ties, Barry had the honour of conducting the service at Guido’s funeral.  Guido’s wife Rina is still with us though she is very frail. Son Marco and Rina live in Lawrence Street Gympie.

While time progresses quickly these days and memories fade, the stories of the Italian POWs on Gympie farms are clearly remembered.  The special bonds forged between a prisoner of war and a Gympie farmer continue to be part of Gympie’s Italian prisoner of war history. 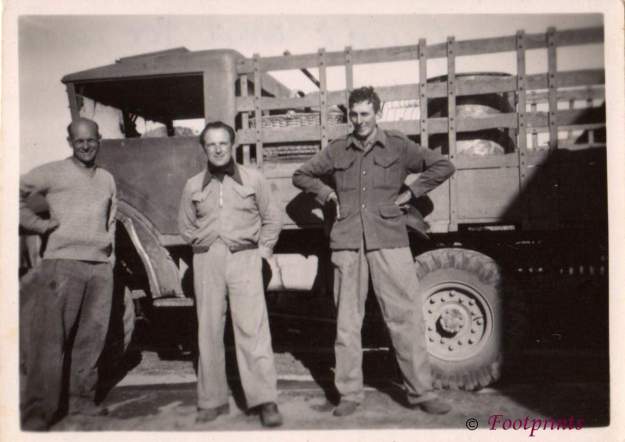 (from the collection of Barry Mason)