November 1946 and there were over 10,000 Italian prisoners of war in Australia awaiting repatriation.

Some of these men had thoughts of returning to Australia and with the assistance of the International Red Cross representative in Australia: Dr Pierre Descoeudres, had completed their Form 47 Application for Permit to Enter Australia and attached theirForm 47 A Medical Examination (For Persons Seeking Permanent Admission into Australia)

In November 1946, Dr Descoeudres wrote to Department of Immigration to obtain another 200 Form 47s.  He had already received 340 completed forms from Italian prisoners of war.

In February 1947, Dr Descoeudres received a reply stating that prisoners of war were: “not eligible for re-admission under existing policy” and that the 340 applications would not be processed.

Form 47 and Form 47A for seventeen Italians are archived and can be viewed online at http://www.naa.gov.au&nbsp; The file is titled: International Red Cross – General File – Dr Pierre Descoeurdes – Representative. NAA: A434, 1947/3/14

Some of the men included photos of themselves, most likely taken by their farming families.

Bruno Zignego included two photos of himself with his crafted models of ships: 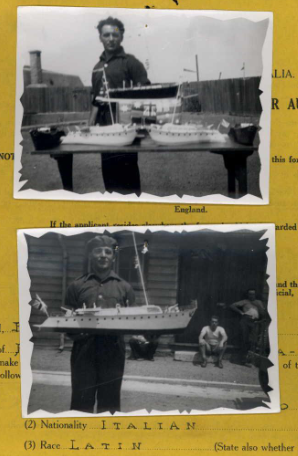 An interesting and perplexing question on Form 47 regarded RACE.  While some of the men wrote European or White, Bruno chose to write LATIN.

This is a list of the Italians for which files exist and who had intentions to return to Australia: