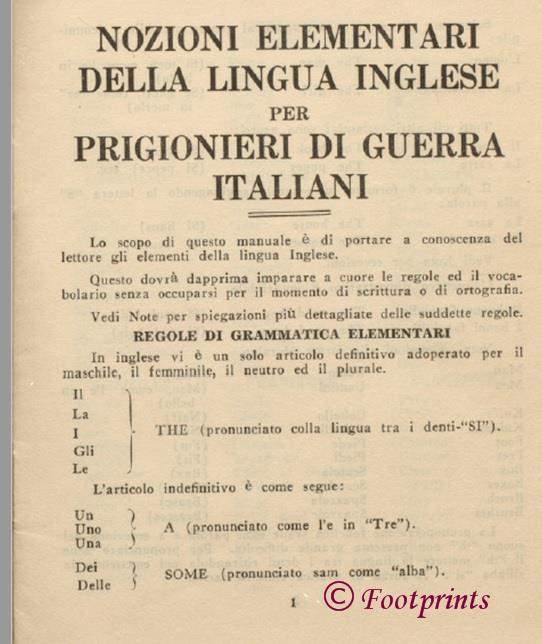 There are many references to the Italian-English language booklet that the Italian prisoners of war were issued with.

Laurie Dwyer from Aratula via Boonah remembers Paul bringing out his book and asking Laurie to help him with learning English: “Paul used the dictionary to try to improve his English but decided that English was stupid.  There were a lot of problems with miscommunication. Paul would wait for me to return home from school and then get out the yellow book they had for English.  Pronunciation was mainly the problem. Paper and pepper sounded the same. He also had difficulty with tree and the.  They had trouble with slang like ‘give it a burl’. One morning dad and the Italians were doing some fencing.  It was time to go home for lunch so dad told them to leave the crowbar there.  The word leave was a problem and they thought dad wanted them to carry it away with them.  Dad would have raised his voice and they thought that he was angry with them.  Paul told the interpreter the next day, ‘boss got mad, I got mad’.  He thought that he would be taken away.  Things were sorted. Another time, the Fordson tractor wouldn’t start so dad went to get the draught horses.  The horses wouldn’t get into the yards and dad would have blown off steam and whatever he said, or it might have been the way he said it, Paul and Peter thought they had done something wrong.  They had a great deal of respect for dad and they didn’t want to get into trouble.  So the next time the interpreter came to the farm, they asked to find out ‘what they did wrong’.  They would explain what had happened and the interpreter would explain what had happened.” (Don’t Run Away)

Dorcas Grimmet in “We Remember: The Italian Prisoners of War 1944/45” a publication about the Italian POWs on farms in the Kingaroy district includes a page from an Italian and English Book for Italian POWs.

And we know that language classes were held in camps like Cowra and Hay.

Pidgin English for Italian Prisoners of War was specifically published  and given to Italian POWs being allocated to farm work under the Prisoner of War Control Centre : Without Guard scheme.  Some of the sections were: Tools, Machinery, Farm Produce, Animals, Hygiene and Medical, Family, House and Conjugation of Verbs.

1 thought on “Pidgin English for Italians”