LG Hoey wrote an article June 1947 about the Marrinup Prisoner of War Camp Western Australia.  The equipment from the site was being sold at action which prompted the journalist to reflect upon the camp’s history.

Marrinup Camp was home to both Italian and German prisoners of war.  The Italians were sent to work on farms and the Germans remained at camp undertaking firewood cutting and collection in the local area.

LG Hoey writes about both the German and Italian prisoners of war:

During the day the camp presented an animated and colourful scene.  Trucks were continually arriving and departing with Italian prisoners, carrying the sick from the rural districts for medical attention at the camp and transporting further supplies of labour as replacements. Outside the R.A.P. a long line of men in burgundy would be awaiting the doctor’s ministrations; it was estimated that 10 per cent of these were genuinely sick.  Malingering was not unknown amongst the descendants of Caesar’s legionaries.

In spite of superficial differences between their respective cultures there was a strong fraternal bond between the two groups of Axis prisoners.  Often at night a German could be seen teaching his language to an Italian, shouting out lists of verbs and nouns through the dividing wire.  On one occasion, as punishment for some offence, the Italians were refused permission to attend the A.M.F pictures [movies]. The Germans immediately staged an impromptu concern for them from their side of the barbed wire. 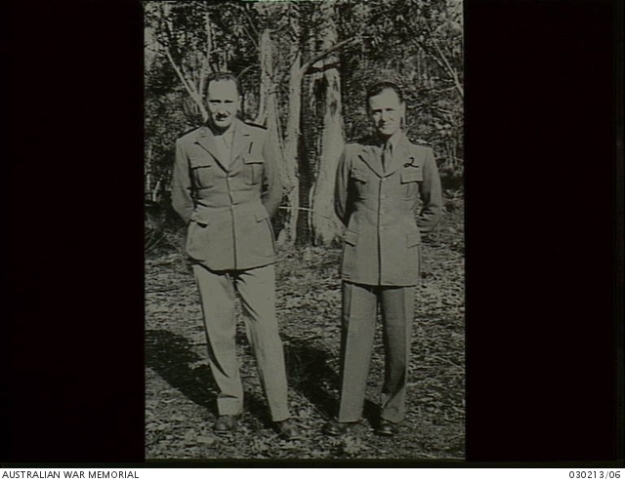 On Saturday afternoons during the winter months soccer [football] matches were often played between the Germans and Italians at the siding. Before each match, the indispensable centre forward on the German side, who was also an habitual escapee, was required to give his parole [word] that he would not try to escape whilst outside the camp confines.

With Latin dash, the Italians would execute some remarkable feats during the game, obviously performing to the ‘house’, whilst their opponents, a heavier type in many ways, would fight back efficiently and stolidly.  Amongst the spectators, the Italians on the one side would dance with every move of the game, shouting and jostling, whilst the Germans opposite would permit an occasional “Wonderbar!” to pass their lips.

After the match the crowds of prisoners would swarm back to camp through the bush, and at its entrance the guards would discover them waiting.  At a work, the Germans would fall in and march to attention past the administrative buildings and the Italians would bring up the rear, cigarettes in mouths, an untidy, talkative rabble.

What memories have these men back in their wrecked homelands? Do the Italians remember the oft-cursed road, the darling of the C.O.? And the Germans, have they forgotten the lovely garden which they created at the drabness which is Marrinup siding: the vases hewn from stone and the terraces, the stream and the rustic bridge, the stone gate posts inscribed P.O.W.G.?

Many of the German prisoners of war had come from England as internees particularly those from captured ships. Some came to Australia onboard the infamous Dunera which also transported English resident England German Jews to Australia.