Col. A.W. Sandford, the son of Sir Wallace Sandford wrote an article Naples – when Italian Prisoners Return Home  which was published in November 1946.  While on his way to Hamburg to re-joining the British Army of occupation, he travelled in a ship transporting returning Italian POW.

The repatriation ship was most likely Chitral which had left Australia in September 1946 with over 2700 Italian prisoners on board.

...From the decks below a constant murmur of hushed excited voices could be heard – over three thousand prisoners, straining their eyes to catch their first glimpse through the grey mists of the docks where they hope to find parents, wives, children, friends, lovers or at worst the attentions of the Italian Red Cross and a rail warrant to freedom.

The light grew slowly more intense as we approached the entrance to the harbor, and one could discern dimly the shaped of buildings in the distance and shipping nearer at hand.  Quite suddenly as the pilot clambered aboard from this ramshackle launch, the first rays of morning struck a cluster of white and pink villas on the headland, away to port – Posilippo, the ‘garden suburb’ of the town.  The city itself shielded by Vesuvius was still plunged in grew gloom, but these scattered villas and palaces on their romantic terraced cliff glittered fiercely in the sun.

By this time more passengers had begun to appear and were standing in tows and threes on the boat deck leaning over the rail.  They watched the sun strike the ancient castle on Capodimonte as we slipped into the harbour mouth and stared in surprise at the city which began to appear, like a stage effect through the dissipating mist.

The harbour was impressive.  The carved stone arms of the kingdom of the Two Sicilies still stand on the western mole, as they stood in Nelson’s day and between the pillars could be seen among the trees towards Posilippo, the glittering white cube of the Villa Emma, where Lady Hamilton held court.

The massive Castel Nuovo still dominates the docks but the splendid new quays built of reinforced concrete by the Fascists have stood far less well than solid Bourbon stone masonry the effect of high explosive bombs. 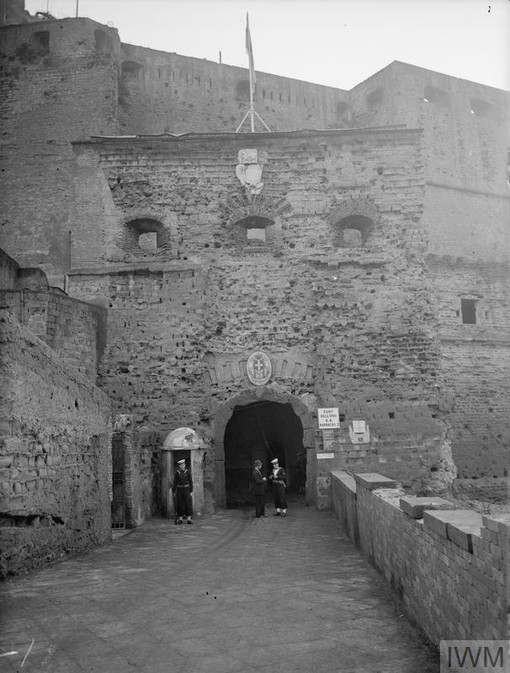 The murmur of the returning prisoners of war had grown to a loud babble as they saw the Italian warships huddled ingloriously against the naval mole and two large liners burned out and rusted lying on the bottom of the city Side.  Another liner had capsized just beneath the eastern mole, and in the centre of the docks, an American troopship was discharging across the hull of another capsized and rusting casualty.  This they observed in a second and then all eyes were turned to the nearest quay which was clearly made ready to receive us.  Stevedores were busy trundling gangways, there were lines of trucks drawn up, lines of carabinieri and here and there the scarlet caps of British military policemen.

Then all at once the prisoners seemed to see in the shadow of the damaged gallery rows and rows of dark-clothed men and women, and a good many children too.  These struggled and shouted and gesticulated from beyond the police cordon in the shadows striving to make themselves heard above the yelling of soldiers and stevedores and the raucous braying of a brass band which struggled on to the quay without a conductor and burst at once into a rendering more vigorous than accurate of “Funiculi, Funicula”.

Following are two video links: Italian Prisoners of War Return to Naples  and  View of buildings near Naples 1946