My search for King George began when Malcolm Davis from South Australia sent me a document about Italian prisoners of war near Gladstone South Australia in December 2019.  And so a needle in a haystack treasure hunt began…

1. from Gladstone a meeting of creeks – a breaking of gauges. Published by The Gladstone Centenary Committee, 1980. Printed by Gillingham Printers Pty Ltd Adelaide SA.

It was at this time that 5 CAD became host to Italian prisoners of war… One POW told the then depot commander, Capt. L.E. Ash, that he was a painter before the war.  Paint was produced from depot stocks, and canvas, but no fine brushes were available.  The POW overcame this problem by using hair from his own head to fashion brushes, and the resulting portrait of King George IV [sic.] copied from the cover of the then current edition of Women’s Weekly, now hangs in the Australian War Memorial in Canberra.

I sat on this information, for two months, calculating my plan of action.  During this time, I used varying combinations of wording for searches in the Australian War Memorial online collection.  I had no luck finding the King George portrait.

2. Women’s Weekly: maybe I could find a portrait of King George on the cover of the Women’s Weekly.  Logically, I was looking for a 1946 magazine, as this is the time that Italian POWs were sent to Australian Army facilities to undertake maintenance work. Fifty two copies later, no luck.  I broadened my search to 1945.  And there King George was on the cover of the April 7 1945 edition. 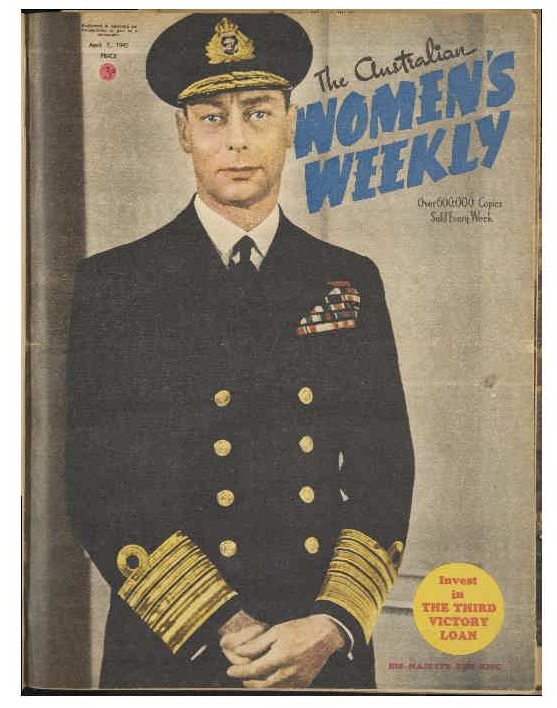 3.   Australian War Memorial: taking the philosophy of nothing ventured, nothing gained I sent an enquiry to the Australian War Memorial: “This is a long shot, but do you have in your collection a portrait of King George VI painted c. 1945-46 by an Italian prisoner of war?  I attached a copy of the Women’s Weekly Cover and also included the details from Gladstone a meeting of creeks – a breaking of gauges. I received a reply stating that my query had been forwarded to their Art Section.

I waited… and within two days, Hugh Cullimore Assistant Art Curator sent me an email. Yes, ART28179 is a portrait of King George VI painted by an Italian prisoner of war in 1946.  The artist’s name appeared to be ‘Godulo’.

This was clearly not a portrait painted from the Australian Women’s Weekly. It was much more beautiful and detailed, a very regal portrait.

4. Godulo: a search of the National Archives of Australia came up blank.  BUT a little known trick is the wild card search:  first three letters followed by *  I found three Italian prisoners of war: GOD*  but only one had been in South Australia.  I had found our artist:

Alfredo Goduto from Roseto Valfortore Foggia; Occupation: Painter.  He was in South Australia from 9.4.46 to 14.12.46 having previously worked on farms in Tasmania.

Now I wanted to know more about our painter eg. Did he continue to paint when he returned to Italy?  But google searches for Goduto Roseto Valfortore Foggia came to zero.  I had come to a dead end.

5. Sydney Cape Breton Novia Scotia and the Goduto family.   Alfredo and his family migrated to Nova Scotia in 1952. He continued to paint and his house and its painted decorations are featured in Heritage Trust Painter Rooms of Nova Scotia. Take the time to click on Building Images at the bottom of the page for a walk through Alfredo’s home.

“In Australia, someone noticed his paintings and wanted him to paint a full–sized portrait of King George V [sic.] to hang in a community hall.  It took Dad months to paint this life size portrait.  The Australians treated him like a king, at that point… they gave him anything he wanted because he was working very hard on this important project.  When he notified the official that he was finished, he was told that an art expert wished to see it.  Not expecting this, he panicked.  He was really worried about someone coming to critique his work, and he told them that he was not a real artist. But the expert came and spent a couple of hours examining the portrait of the king.  The expert was truly impressed with the work and could only find one problem.  He pointed to the king’s hands. “You made his hands too feminine; they should show his veins.”  Dad quickly touched up the King’s hands.  The expert offered Dad a job in Australia after the war, but Dad never did go back.  Much of his artistic ability was nurtured during that period because he had a lot of leisure time at his disposal.”

Hugh Cullimore AWM has been informed that the portrait requires restoration work. Once restored, a high quality digital photograph will be taken and uploaded to the digital catalogue of the Australian War Memorial.

Contact has been made with Alfredo’s son, Dominic and the family is very grateful to finally ‘see’ the King George portrait that they had heard about so much.

7. A community effort: Malcolm Davis, Hugh Cullimore and Dominic Goduto have been instrumental in writing this history of the King George Portrait.  My research is very much about connecting memories, stories, photographs and artefacts to their history and historical context, so this has been an absolutely amazing outcome.

WATCH THIS SPACE: Hugh Cullimore will write an article on the AWM website once the portrait is restored and photographed

4 thoughts on “Searching for King George”