A special thank you to Vic Adamthwaite: Vic contacted me for information about the Portsea POW Hostel. His father Frederic ‘Gordon’ Adamthwaite had served in New Guinea and on 18.10.45 he was assigned to Portsea POW Hostel and put in charge of a group of Italian prisoners of war.

What information was there about this Portsea POW Hostel? And so another search begins….

The first glimpse of this hostel is found in the War Diaries held in the Australian War Memorial:

Portsea is on the Mornington Penisula so now there were two documents verifying this hostel.

The second glimpse of this hostel was found in the newspapers: 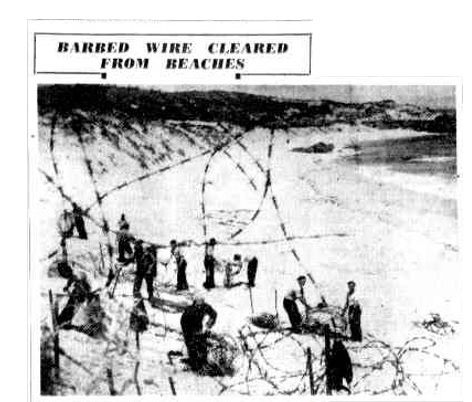 RUSTED AND USELESS for salvage, hundreds of miles of barbed wire entanglements on Melbourne’s beaches are now being removed and buried on the beaches by Italian prisoners of war.  The entanglements were erected round the coast from Pt. Nepean to the shores of Westernport Bay when Australia was threatened with invasion by the Japanese.

The photo above was taken at Back Beach Rye. A second photo shows one Italian prisoners of war digging a hole to bury the barbed wire in the sand.

The third glimpse was found in a book: Coastal Guide to Nature and History: Port Phillip Bay written by Graham Patterson.

From a paragraph about Point Nepean: “During World War 2, Italian prisoners of war were put to work weaving mats of grass and reeds to prevent erosion of sand dunes.”

“At Point Nepean, some 75 Italian POWs were housed from August 1945 to December 1946 at the Mornington Peninsula Hostel, also called Happy Valley, near Cheviot Barracks. Australian troops who served at Nepean at the time told how the hostel was a ‘miserable place, infested by flies and mosquitoes, unsewered and damp’.  The prisoners were typically employed by the army, planting grass at Cheviot and surrounding areas, covering sand dunes with mats woven from grass and reeds to combat erosion.”

The fifth glimpse came from the record of Bruno Anceschi:

Referred to as V26 Mornington, Bruno spent time ‘at the beach’ from March to December 1946.

Aniello Amico’s Record reports that he spent time at both the V26 Mornington Hostel and V27 Bellarine Hostel.  Next step was to discover the location of the hostel at Bellarine Peninsula and what type of work the Italians were engaged in.

FOUND: Gastone Petroni and Salvatore Valentino are another two Italians who were sent to V26 Mornington. Vincenzo Andreucci worked at borth V26 Mornington and v27 Bellarine.

The first glimpse comes from a newspaper article and subsequent letters to the editor:

TODAY I received a complaint from Point Lonsdale that much of the tea tree along the cliff overlooking the ocean has been destroyed quite senselessly to make room for a P.O.W. camp which was engaged “in disposing of barbed-wire entanglements. My correspondent points out that much of the clearing was unnecessary, for it included a wide area round the camp.”

A Point Lonsdale Ratepayer agreed with the sentiments of the article and the wanton destruction of tea trees, while a Lonsdale Local supported the clearing of tea trees by Italian prisoners of war and suggested that they make fire breaks while they were there, as the area was a fire hazard.

At the height of the war, there were fifteen camp buildings at Point Lonsdale. Towards the end of the war, some of the structures accommodated Italian Prisoners of War.

The third glimpse comes from Margaret Bruin’s ABC article: The guiding lights into Port Philip Bay.  Scroll through the photos of the Port Lonsdale Lighthouse to a black and white photo of an Italian prisoner of war, arms crossed with the lighthouse and buildings in the background.

Angelo spent from Sept 1945 to March 1946 at PWCH Lonsdale (Prisoner of War Control Hostel): ‘a summer at the beach’.

Records can be confusing especially when different place names are used for the same prisoner of war site.

FOUND: Antonio Trinchini was assigned to PWCH Lonsdale 20.9.45 and then has V27 Bellarine 14.10.45 on his form. Did the hostel site change or was there a name change?

If you are a local from these areas, and know this history, please make contact and add to this prisoner of war history or assist with corrections of information.

If your father or grandfather has the words Lonsdale, Portsea, Bellarine or Mornington on their Service and Casualty Form, please make contact so that a list of names of Italian prisoners of war at these hostels can be compiled.