How many Prisoner of War money and Internment Camp tokens made their way back to Italy?

Upon entry into Australia, all money in the possession of Italian prisoners of war was to be ‘handed over’ to authorities.  Property statements were maintained indicating money on hand.  This statement was a receipt.

There are memories of the Italians having Australian coins with which they made rings for themselves and for their farm families. Black market trading in ‘canteen goods’ for Australian money is also inferred.  However, Italian prisoners of war caught with Australian currency were given 7 days detention for having money in their possession. 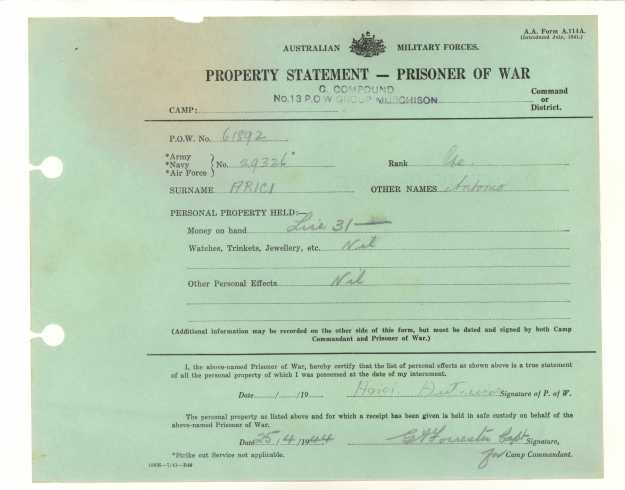 Many Italian prisoners of war managed to ‘hide’ money.  Alex Miles from Mooloo via Gympie has lost the Italian bank note he was given by one of the Italians.  It showed the she wolf with Romulus and Remus.

Veniero Granatelli has shared his father’s POW money.  His father, Filippo Granatelli managed to keep a bank note used in the Bhopal Prisoner of War Camp India, which is shown below. 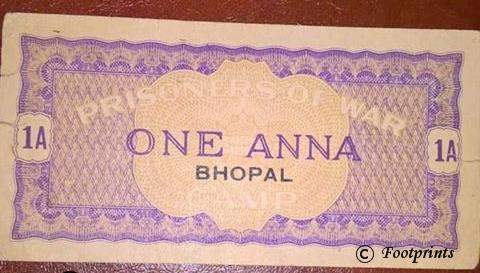 Very excitingly, are the coins that Filippo Granatelli kept hidden.  They are Internment Camp tokens.  These tokens were used as payment at the Army Canteen and their production and destruction was strictly controlled. A little of the history of these tokens is included below.

An indication of how valuable these coins are today is the price for a set of tokens.   Considered a rare and unique collection, a set can be purchased for $7,950. An uncirculated threepence sells for $250.00 and a penny token $299.00.

The reasons for their introduction are as follows:

a) to prevent bribery of guards

c) to prevent the use of prisoners’ and internees’ money for subversive purposes.

A Department of  the Treasury letter 9th February 1948 summarises the production and post war holdings of these tokens:

How many Internment Camp tokens made their way back to Italy?

1 thought on “Money and Tokens”