Paolo Reginato was a soldier with the 202 Regg. Artiglieria Division XXVIII Ottobre when he was captured at Sidi el Barrani 11 December 1940.

A special thank you to Daniel Reginato and his family for sharing the details of his father’s libretto.  Paolo’s record of his days as a soldier and a prisoner of war is adding a personal perspective to this history; written at the time his comments are brief but poignant.

Paolo writes: On 8th December (in the afternoon) we suffered a heavy naval bombardment and on the 9th we were attached by a strong artillery fire throughout the day, the same afternoon when the fire ceased the order came to retreat to Sidi el Barrani. Our subcommander takes a bottle of anise and makes us all dring, one by one with his own hands on his knees around him, at night we follow the retreat and on the morning of 10th we are located 10 km from Sidi el Barrani where we went again. We attacked with batteries and armed cars throughout the day, at night the fight continued until day 11, at hour 9 I was taken prisoner with almost the entire divison.

Naval ships were to shell the Maktila positions on the night before the attack, [8] air support was to be given by No. 202 Group which included three squadrons and one flight of fighters, three squadrons and two flights of day bombers and three squadrons of night bombers… [9th] Frightened, dazed or desperate Italians erupted from tents and slit trenches, some to surrender supinely, others to leap gallantly into battle, hurling frenades or blasing machine guns in futile belavour of the impregnable intruders… On the morning of the 10th the 4th Armoured Brigade was lying on an arrowhead between Sidi Barrani and Buq Buq, facing on the west a series of Italian camps…the 7th Hussars attacked the enemy’s posts but they were too strong to take withouth costly losses and by early afternoon the main strength of the brigade had been sent eastwards… 6th Royal Tanks and the 2nd Royal Tanks attacking…  the 16th Brigade had attacked at dawn on the 10th..Advancing over open country in a dense dust storm it was met by effective artillery fire and was held… Finally a concerted attack late in the afternoon broke the enemy’s reisatance and by 4.40 Sidi Barrani had fallen. 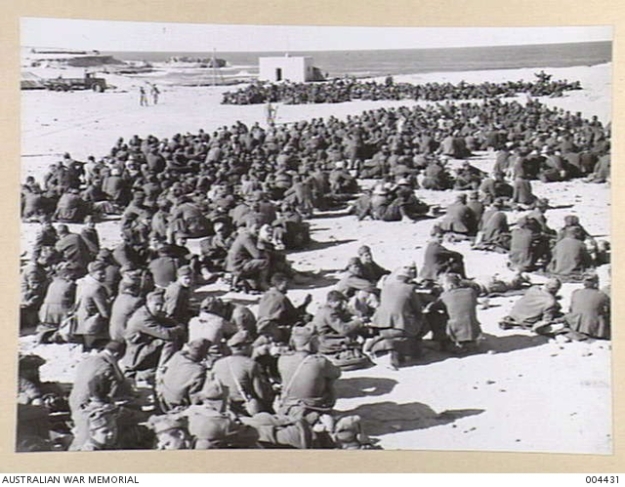 12th December 1940 SOME OF LATEST BATCH OF 4000 PRISONERS FROM AREA BETWEEN BARRANI AND Buq Buq. ALL ITALIAN TROOPS WERE WELL-CLOTHED & ARMED & IN GOOD PHYSICAL CONDITION BUT SEEMED IN NO MOOD FOR FIGHTING AFTER THE FIRST FEW HOURS OF THE ENCOUNTER. (AWM Image 004431 PHOTOGRAPHED BY F. HURLEY).

Long columns of dejected prisoners in drab oive-green and khaki streamed eastwards.  In the whole battle 38,300 prisoners, 237 guns and 73 tanks were captured. Four generals were taken: Gallina of the Group of Libyan Divisions,  Chario of the 1st Libyan Divison,  Piscatori of the 2nd Libyan,  Merzari of the 4th Blackshirt.